SI stuff and other links

SI sees us as a middle of the pack team. The newstand preview ranked BC at 37 and Stewart Mandel predicted a third-place finish in the division. In a somewhat contradictory move, the same article also listed us as a team on the rise.

Other nuggets from their coverage include selecting Kiwi as the best player in the conference.

SI giveth respect and then taketh away. John Walters names the Top 10 moments of the Orange Bowl and then disses BC by picking Flutie’s pass as No. 2 moment? WTF? The pass is arguably the most famous play in college football. How can it be the second most important college moment in the Orange Bowl history? (Don’t worry. I’ll get over it.)

Here is a pick of the new museum within the Yawkey Center. 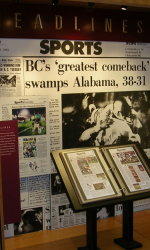 To read more on the new digs click here.

In basketball news, Smith and Dudley were named preseason candidates for the Wooden Award.

Sometime i prefer to read such novels and books that are quite different from others and have some positive taste in them. A person who will read such books will be best by college essays service because he will judge the correct use of words that explain emotions and feeling that will help to convey thoughts in more better way. Such article are very best for us to increase our reading skills too.