All in on Antoine Mason 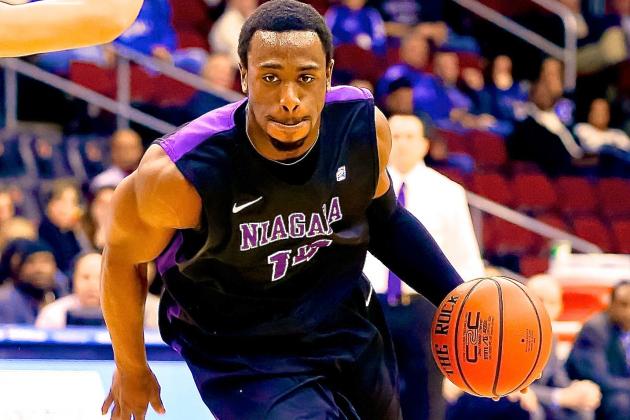 It looked like Jim Christian had a clear plan for 2015, but then Antoine Mason became available. BC will get the 5th year's final visit next week and his decision can drastically change BC's outlook for next season.

I thought next year would be the Hanlan show: with BC's dynamic combo guard handling the ball and being its main scorer. Even when Donahue was here, I advocated an offense where Olivier drove or hit 3s and left the rest of the guys to rebound and play defense. Niagara knows what that offense was like, because they did something similar with Mason last year. I wonder how Mason fits with a team focused on Hanlan.

Mason knows what's up. He is transferring so he can play at the highest level and so that he can come in carry a team from Day 1. If BC has gotten this far with him in the process, we are likely telling him that the he will score and touch the ball a lot. I have no idea how they are positioning Hanlan to Mason (or vice versa). Maybe things can work if Hanlan serves as the true point and Mason the main scorer. That seems like a waste of Olivier's abilities and efficient scoring.

Ideally both would score in bunches and BC would be a dangerous team that could cause multiple matchup problems. But even if the pairing is a disaster, getting Mason to commit would be a major coup. He's the best guy available and we are selling him hard. If we land him, it will prove our coaches know how to say just the right thing to the right guys.
Posted by ATL_eagle at 6/02/2014

the team as currently constructed is going to be god awful. Hanlan is going to face double teams the vast majority of every game. if we are lucky enough to get Mason, they would be able to play off of each other and open things up for one another. the idea that we don't have enough shots to spread around is ridiculous; Hanlan is nice but he's not 2001 Allen Iverson, he can't take every shot.

hopefully we don't let this kid off campus without a commit like we did with the guy who wound up at URI. we can guarantee he'll get plenty of shots, play with another talented guard, and get plenty of exposure in the ACC.

if he has half the toughness his dad does, he is a much needed addition regardless of offensive talent.

Yeah, we need some toughness back -- all the really good BC teams had it