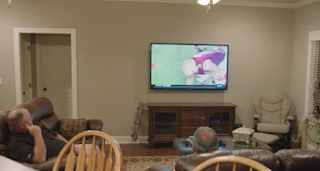 In Last Chance U, Season 2 East Mississippi head coach Buddy Stephens goes to visit his father who has terminal cancer. While visiting, they watch BC football (I assume it is the bowl game). That is the only BC reference in two seasons of the Netflix show. For a variety of reasons, BC stays far away from the JUCO world. But don't let that distance keep you from watching. The show remains an excellent look at how the sausage is made in College Football. It is well worth your time.

Due to the popularity of Season 1, Season 2 takes on a whole different vibe than the first year. All the participants are hyper-aware of the cameras and how they might be portrayed. I also think the team and school benefited from the show's notoriety as there is an influx of Power 5 transfers looking to get back to the big time. East Mississippi made their name with Power 5 problem children, but this year's team had an unusually large amount of second chancers. I assume that when these guys went looking for JUCO options a year ago, being on TV was a major plus for East Mississippi.

But even if Scooba, Mississippi is a different world from Chestnut Hill, that doesn't mean there isn't a lot to learn. Our players deal with the same frustrations with coaches and classes. The bonding formed out of playing together and isolation from the rest of the world is similar. Plus the job aspect is the same. We want these guys to be playing for the love of the game, but most are using football to get somewhere else.

I continue to struggle with the hypocrisy and exploitation of college football, yet I still love it. Because of the nearly unlimited access, Last Chance U puts all of those issues on full display. And in the end, I still enjoyed the eight hours, was rooting for most involved, and couldn't wait for real football to start.
Posted by ATL_eagle at 7/27/2017

Email ThisBlogThis!Share to TwitterShare to FacebookShare to Pinterest
Labels: Last Chance U

I noticed that too but after rewinding a few times I noticed it was the BC Clemson game and we were down 21-3 at the time. At least they didn't show the parts when they put up 50+ on us lol

Well worth the time.

Football is a dangerous sport but there is just something about it. Last week when the temperature reached 108, you just had to think football. The product on the field may be chilling but "hope springs eternal".

Anonymous said...
This comment has been removed by a blog administrator.
12:32 AM