Perry in the mix 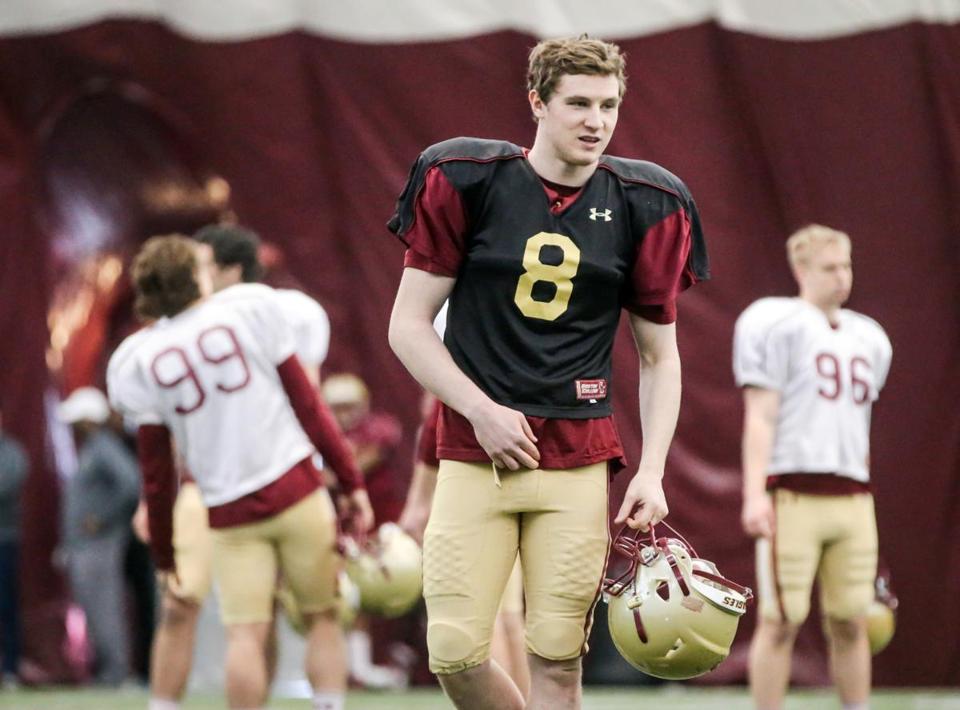 In his press conference Monday, Steve Addazio said all options are on the table, including playing true freshman EJ Perry. This should not be a surprise since there have been plenty of signs that the staff was high on Perry. The most basic is that Perry seems to shadow Addazio on the sidelines. There's always the No. 8 just over Addazio's shoulder. The other clue on Perry's standing is that over the past few weeks Meter and Cronin have brought him up on their broadcasts. This weekend all the talk and promise could shift from "what if" to actual playing time.

Some BC fans don't think it is fair or wise to use Perry now with just two games remaining. I don't really think it is the fans' call. Addazio mentioned having a talk with Perry and his parents about playing him now. If he and the Perrys want EJ on the field, why should we care about his redshirt? He can always redshirt again down the road. As much as more time and development helps a career, it doesn't guarantee anything. Look at all the "development" time Darius Wade has had. Does it show on the field? Does Wade's seem more comfortable in the pocket than he did two years ago? Playing now gives Perry a chance to see live action and something beyond practice.

If Perry does prove to be better than Wade and they beat UConn, he suddenly gets a chance to practice with the first team for month of bowl prep. The downside is if Perry struggles and only plays a little bit. Then he has little to show and has to sit another year. But either way if Perry plays now, sitting down the road is almost inevitable. You would have to assume he would want to be in a different eligibility year than Brown so that he could be the starter after Brown uses up his eligibility.

Even with the uncertain QB status, BC remains a heavy favorite over UConn. There is no reason BC should lose this game. Wade seems like the best answer, but I don't want BC to struggle if Perry is ready to go.
Posted by ATL_eagle at 11/14/2017

Email ThisBlogThis!Share to TwitterShare to FacebookShare to Pinterest
Labels: Addazio Year 5, BC vs UConn, EJ Perry

Play Perry - I sat behind the bench last game and the minute Brown got hurt Perry had his helmet on and threw on the sideline for the remainder of the game basically begging to go in. The kid wants to play and you can see his competitiveness.

Not sure the same can be said for Wade. His sideline demeanor and lack of leadership was evident, it was a big spot and he did nothing on the sideline to engage or attempt to lead his offensive unit.

Perry is a winner and unfortunately for Brown he may lose his position by injury. I think Perry may never give up the starting spot once he gets a hold of it.

BC is going to beat UConn by 30+pts. They have zero chance of stopping Dillon and the OL should pound them. Our D has been playing great lately and will swallow up UConn. It is a great game to get Perry's feet wet, hand it off to Dillon 30x and he will have plenty of time to throw the ball in comfortable spots. Let him get some experience for Cuse which will not be a easy game. As ATL said then Perry has a month to practice 1st team reps and play in a bowl game. That will give Daz (or whoever is the HC next year) 2 legitimate quarterbacks with real game experience for next year.

But, if he is the best option now then he should play. I think 3 meaningful games as a starter while aiming for a bowl is much better experience for his development than garbage time snaps as a RSFr or Sophomore. He'd get less snaps in a full season as a #2 and they'd be much less meaningful snaps.

Can you spell Flutie

Very different than what AB offers. Offense will need to play different game with Perry than AB.

No P5 offers other than BC. Is he an ACC level athlete? Hope so.

I am not expecting much if he does get in the game.

Where are the QBs of Boston College past? Answer: Daz can't recruit them.

Told you bitches at the beginning of the Perry was going to be good.

He came in early, can sling it and is a climber. Concerned about durability.

Massachusetts players are any good. Millennial moron comment of the decade. Idiot.

Assuming that is accurate.

Lol, Knuck, you are priceless.

Yeah, ha. The people on here are morons. They think so highly of themselves even though they lack knowledge, perspective and sanity.

Knucklehead said...
This comment has been removed by the author.
8:21 PM

Thanks for sharing this. I am student of HTC SPORTS that provides Sports Community Programs

If Wade falters - Perry or Smith have to play. Assuming Brown is healthy for next season - Perry wants his opportunity (more than his redshirt) as they don't come along too often. Even if you've seen his practices - how Perry will fare in game conditions is a total unknown. Would think that decision has been made since the game prep for Smith or Perry would be different. My guess is that they will call up Perry as his game prep is closer to Wade's. We cannot lose to UConn - especially in Fenway.

On the other hand would seem that using Smith would be less of an adjustment from Brown than either Wade or Perry.

Put Elijah Robinson in. He came in as a QB. I kid, i kid

realistically this might be Perry's only shot to play. Brown is better than him and will be back next year. we have a couple of other QB (mcdonald, haynes) redshirting this year and two more QB coming in next year, and who knows what happens after that. it should entirely be up to EJ and his fam, but if Daz talked to them and they want the opportunity he should play. Wade stinks.

Agreed. This kid Perry was a lightly recruited product of Andover High. Now like any recruit, he could surprise, but this isnt some stud recruit. With the way Brown is developing and with the QB's recruited this year, this might be the kids only shot. That said, I would prefer Wade first, though he is not good. If he falters, I would prefer Jeff Smith next.

Wade standing there like a statue last weekend taking those sacks pissed me off. He needs to tap out if Dazzler starts him. Fake an injury so Dazzler puts in Perry. Then Dazzler can back into having a good QB like he backed into having a good o-line with Petrula.

First of all, Baldwin could lead BC to a win against UCONN !!!!! The issue is winning both UCONN and SYRACUSE . That would mean (IMHO)starting Jeff Smith in both games (agree with Knucklehead) . He is a fine athlete with speed who could scramble like AB and he has proven that he can be a competent QB. As a side comment , I would like to state that BC had a great chance to beat NC State (even losing AB)if they had a "Top Notch" coach who adjusted quickly to a sudden change (losing AB to injury) in a football game !!!! But Addazio always panics when a game is close and quick intelligent decisions need be made !!! NUFF SAID !!!!!

Agree about Smith - but he has been practicing as a WR for months. Might be safer to use Perry or anyone who has been training at the position.