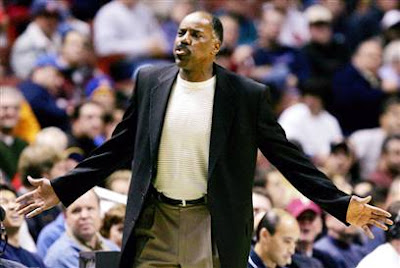 This should come as no surprise to regular readers, but I think Al did a nice job this season. Certainly not his best work (I would put 2001 as his top year and 2004 as his next best), but considering all the things he dealt with, we should be proud of our team and the season. For the second straight year he had us in the Top 4 of the ACC and held the team together when things could have fallen apart.

My biggest problem with Al and criticism of the season is also what I am indirectly most proud of – the whole Sean Williams thing. Al is not a good baby sitter. Period. It has hurt him and the program over the years. We never would have been in the mess had he handled Williams and McClain differently earlier in their careers. Losing players like that disrupts the roster, hurts chemistry and put guys in awkward positions on and off the court. However, as much as Al helped create this mess, his definitive work in cleaning in up and holding the team together deserve high marks.

There are a few other gripes. The game management raised questions, but at this point I’ve come around to recognize how and why Al manages the game like he does. In addition to game management, other issues arose. Al’s rotations raised questions about Oates and Roche’s minutes. Haynes and Spears did not develop. Our defense remained a liability. We also lost games we should have won like Duquesne and Vermont.

Now let me get all Pollyannaish as there was plenty to be glad about. I was happy to see the offense remain very efficient. Down the stretch Skinner varied our defensive schemes more than he has in five seasons. The assistants picked up where the old staff left off. Oates and Blair got better as the season progressed. We kept our composure during the Miami game during the ACC tourney and won tough games against Florida State.

Not Al’s best work, but considering all the distractions, I will still give him a cushy grade.

I'm not sure there's another coach in our conference that could have taken the post-suspension group and made the tournament...and if there is one, he has a bunch of nat'l championship banners.

Al's game management and lack of control over the players come from the same part of his mindset. He's all about giving guys a platform to succeed: on the floor, and at school...he runs his basketball system, BC has its athletic support system, and everything's there for the players to take advantage of it. If they don't, they don't. That's his attitude. Generally, it works...but it has offshoots like Oates taking 35 3s per game while shooting 8%, teams going on 15-0 runs, and suspensions.

Oh Lord, here come the Al Skinner blowhards to defend him once again after a miserable coaching display this season. One of the excuses we all here is that he had sub-par ACC talent after the suspensions. Well, whose fault is that? It's Skinner's fault. The fact that everyone and their mother are transferring now contributes big time to this problem. Anyone realize that Johnny Oates is the only player remaining from the vaunted 2004 recruiting class. That is absoutely pathetic and unexcusable. He needs to do much more to retain his player. Another lame excuse always being thrown out there is that Al runs a clean program and virtually all of his players graduate. Another inane excuse. Al's graduation rate over the past 5 years (excluding the previous years which witnessed the dismissal of Ryan Sidney and Andrew Bryant) the BC's basketball graduation rate is 50%. That is absolutely pathetic.

Bravesbill, our basketball grad rate over the past 6 years (which includes Sidney and Bryant) is 80%. Transfers don't hurt your grad rate as long as they were on time to graduate when they leave your school. No one ever thought much of the 2004 class. The 2003 class with Marshall, Hailey and Coleman was the supposed great class. And if you read what I wrote, I do blame Skinner for not policing his kids.

I agree with flutie22phelan20 on Skinner. I thought this was one of his better coaching performances. Especially after losing his two top assistants last year.

Bravesbill, where does all this negative anger come from? Do me a favor, take a break from blogging, leave your apt for a night, and at least attempt to get laid. Who knows, it may help your pessimistic outlook on life...

I think Skinner is an excellent coach who did a solid job this year, but I'm tired of all the dumbasses he's bringing to BC. A clean program it's not. I thank him for what he's done but it's time for him to go.

AtlEagle is giving out faulty information in defense of Al. According to the NCAA, "a graduation rate (percent) is based on a comparison of the number (N) of students who entered a college or university and the number of those who graduated within six years." "It is important to note that graduation rates are affected
by a number of factors: some students may work part-time and need more than six years to graduate, some may leave school for a year or two to work or travel, SOME MAY TRANSFER TO ANOTHER COLLEGE OR UNIVERSITY, or some may be dismissed for academic deficiencies."
(http://www2.ncaa.org/portal/academics_and_athletes/education_and_research/academic_reform/grad_rate/2006/d1_info.pdf)

As you can see, the graduation rate would be 50% instead of your incorrect 80% calculation.

Bravesbill said...
This comment has been removed by the author.
11:22 PM

Bravesbill, I cannot find the link but hopefully many remember that before the tourney, the Globe ran a bracket based on graduation rates. BC's was 80%.

The graduation rate the Globe was using is calculated from 7 years ago. It only provides information about student-athletes entering BC in 1999. The NCAA waits 6 years to calculate the graduation rate from this 1999 class in order to give these students 6 years to graduate. It considers nothing that has occurred in the last 5 seasons. So as you can see, it doesn't even take into account the Bryant and Sidney dismissals yet. The graduation rate in 2013 years will accurately reflect what has happened at BC in the past 5 years.

Look the issue of grad rates in not primary or even secondary....

First off is that Skinner for all of his positives has underachieved in the posteaseaon. A grand total of 1 Sweet 16...in 10 years at BC. That is the it at the end of the day.

Just think about how loaded last year's team was (Smith, Dudley, Williams, Marshall, Rice)....and we barely got out of the first round and then laid an egg against Villanova. It points to poor big game coaching.

And secondly is the issue of "babysitting" or put another way, recruiting the tye of players that will thrive at BC. Not to point out the obvious, but the Williams/McClain situation hurts not only this year but next year. How difficult is it to vet recuits when you have an entire year to bring in only 3 or 4 guys. And as everyone knows these guys are not the first headcases at the Heights.

Speaking of recruiting, even this year after the Georgetown loss Al said to the Globe words to the effect that BC will never land a McDonald's All American.

Well why not Al??? I mean we play in the top conference at a prestigious academic school in one of the more metropolitan cities in the world? Why has he never landed a Top 100 recruit until this year. Perhaps its Al's laid back or put another way anti-Bruce Pearl style.

Al with his "diamonds in the rough" recruiting methods artificially so lowers the bar that our fan base seems content with our gritty, keep it close, win more than we lose medicore results.

While I am excited that we are now landing some Top 150 recuits and I think Al may turn the corner in the next 3 years, his 10 years of results really sort of smell alot like TOB....

I would have given Al a B- for the year and C+ if he had not snagged som many rated recruits.