Get to know Pete Carmichael Jr 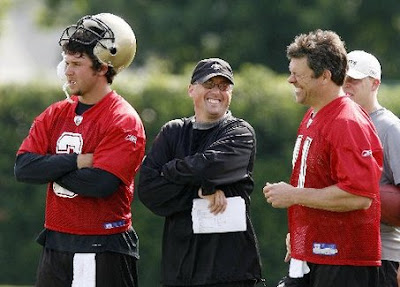 With the Saints now in the Super Bowl, you will probably start to hear the name Pete Carmichael, Jr a lot in the next two weeks. Carmichael is the coordinator of the high-powered New Orleans Saints offense and of course he went to BC.

BC fans might not realize the Carmichael connection since he played baseball, not football, at the Heights. Pete's dad, Pete Carmichael, Sr, was a long-time BC assistant under Yukica, Bicknell and Coughlin.

Pete Jr hit many of the same stops as other BC guys including a stints at UNH and Louisiana Tech. His big break came in New Orleans as he got high profile positions like QB coach and now OC. In most years Carmichael would be a hot name and tabbed as a "genius" and whatnot. But with Sean Payton still calling the plays, Carmichael is left a little bit in the shadow. I think that will change this week as Payton and Brees will have a chance to shine the light on their valuable OC.

Some hoped Carmichael would be interviewed for the Head job at BC after Jags was fired. I never got confirmation if he was interested or even seriously discussed. Now with his ascendancy into the NFL's biggest stage, we may not get a chance to ever see him on the Heights. Regardless, it is nice to have another BC connection to the big game.

Seeing Mark Brunell is uniform is the equivalent to turning on the tube and seeing Jeff George or Bledsoe on the sideline or holding kicks.

"That guy is still around?"

Makes me think of guys who played 10 years of college basketball without the NCAA catching on:
- Constantine Popa of Miami
- Jon Linehan of Providence
- That Martinez guy from Kentucky who had a mustache
- Bryce Drew
- Scotty Reynolds
- Julius Hodge

how about Luke Harangody at ND? it seems like he's been there since 2003.

Jamie Silva will be repping BC for the Colts. Is Dunbar still on the Saints? That would be pretty interesting if BC had two guys on opposite sides.

Last I heard Dunbar was on IR with a bad hamstring injury. Otherwise, he was one of their main gunners on kickoffs, and getting some time at LB.

Yeah, I looked up Dunbar the other night. He got hurt in December and was put on IR. Hopefully he gets to travel to the Super Bowl and take in the experience.

El Miz - great call on Harangody. Its his 7th season I think.