BC back in the Super Bowl and other links 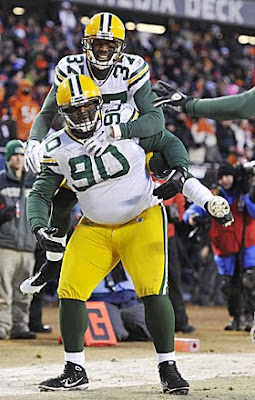 With the game on the line, look to the former Eagles to make a play! Congrats to BJ on his big touchdown and to Packer fans everywhere. Let's not overlook Robert Francois's contributions too. Also, good luck to the Steelers and the Rooney family (which has plenty of BC ties). I don't care for either team but will probably root for Green Bay because of their BC guys leading the way.

One of BC's top commits, Graham Stewart, will host Florida coaches at his house this week. Fortunately we are deep at LB, but I would still hate to see a kid ditch us so late in the process. Let's hope Spaz has someone camp out at the kid's house to keep him in the fold.

BC lost out on Brandon Clemons too. He's headed to Michigan State.

The hockey team pulled away from UMass-Lowell en route to a 5-3 win on Saturday night.

Women's basketball lost to Georgia Tech on Sunday and fell to 2-3 in ACC play.

It really is absurd to think of how many players off of our 2007 defense have ended up in the pros (Raji, Brace, Silva, Tribble, Dunbar, Francois, McLaughlin and soon to be Herzy). That plus Matt Ryan and it really kinda retroactively lays to rest the claims we didn't deserve a top 10 ranking that year.

I'd hate to see Stewart decommit but I'd sleep better losing him to UF than to Edsall bringing him to Maryland or the new UConn regime keeping him in state.

Dan -- I think Raji was academically ineligble for the 2007 season. But, you are right, it was quite a team.

As for Graham Stewart, kid is sending out a strong vibe that he is not a BC guy.

He got bumped from 3 star to 4 star and now he thinks he owns the world. He actually has got both Florida head coach Muschamp and Spaz coming to his house this week for a visit. Kid must have a Deion Sanders type ego and would be perfect for Florida.

There also has been some chatter in the blog-o-sphere that Suntrup is being recruited anew by Michigan. Tate Forcier, the former Frosh Phenom QB, left Michigan, and they are looking for a new underclassman QB. Apparently, Suntrup is one of the guys they are eyeing.

It was great seeing the success by Ragi. It was also noted that Francois made many good tackles on special teams. Here in St. Louis, I would not be surprised at Suntrup (Chaminade) for "bailing out" elsewhere. He has lots of potential, playing basketball with lots of rebounds, and the offensive situation at BC is in serious flux.

Kids do this all the time, he is still committed to BC, what is wrong with keeping your options open? And yes he should feel good about himself he is a top recruit, why wouldn't he listen to one of the top defensive coaches in the country at one of the top colleges. Let's be honest if the kid wants to win he goes to Florida, especially after he watched us all year.

Tim, sure this sorta thing goes on all the time We all know that. It is " how things are done." I still don't like it; it's sleazy. I guess I am old fashioned.