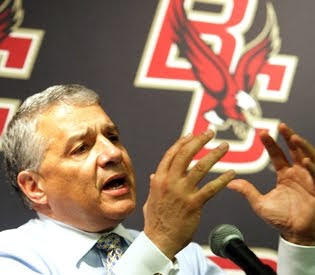 After forcing out the scandal plagued Mike Hamilton, Tennessee is looking for a new Athletic Director. Gene DeFilippo began his career at Tennessee and has kept close ties to the school and its network throughout his career. In fact, Gene has said that Tennessee did reach out to him years ago, but he wanted to stay at Boston College. Now as the Vol Nation looks for a new AD again, will they come back to Gene?

There are a few factors that will probably stop this conversation before it starts, namely Gene's age. I imagine Tennessee will want a long term solution and Gene is more of a five year option as opposed to a ten year. Secondly many of Gene's relationships were tied to Fulmer people. I don't know how much that means now or will impact his candidacy. Gene was a much more viable candidate when he was Fulmer's "guy" and Phil was winning National Championships.

I also don't know if Gene would want to take the Tennessee job. He has unusual power for an AD at a BCS school. He's spent some time this offseason refuting his rumored level of involvement in football. At Tennessee any overstep or piece of gossip would be much more scrutinized. But like I mentioned with TOB, all of these guys have egos and for Gene, landing a big SEC job with one last big pay day might be tempting.

Great! I hope he goes and BC can bring in a lacrosse friendly AD and restart the program that should be one of the best among the Division 1 ranks, competing within the ACC (3 o4 4 Final Four teams were ACC). He is missing the boat by not being involved with the fastest growing sport in the country. Michigan announced it will be adding men's and women's lacrosse in 2012 and 2013, respectively. Notre Dame, Georgetown, Fairfield , and Villanova are other Cathiloc schools consistently in the top 10 or 20. Wake up Gene!

Get rid of GDF (and then Spazooo toooo)! Time for new blood.

Bring back lax and dump baseball. (BC has no clue about LAX) It is a big no-brainer. Just look at kids across the USA, they are picking LAX at a much higher rate than baseball.

There are also many former BC LAX guys on Wall Street with lots of $$ that will not fully give until BC brings back LAX. So if reintstated, Lax will be $$$ +++, for sure.

Why even have baseball? BC got lucky a few years back, but that won't be happening again any time soon.

Let's dump some other lame men's sports too while we are at it to allow for more money for LAX: Cross Country, Golf, Track, Skiing. Really, BC is non-competitive in these sports and has been for ages. A new AD will be able to cut some of these sacred cows. If a sport is not revenue positive and/or not highly entertaining for the students and alum, it should be dumped in favor of LAX.

Hey, if you really luv the feel of track, rent Chariots of Fire (and you'll luv the music too)

In contrast, LAX would easily put 20,000 fans into Alumni each home game and make money for BC.

Jimmy, you forgot the red font (for sarcasm).

Jeffy -- are you a synchonized swimmer on the swim team? or do you run steeple chase on X-country?

How has that picture of Gene not been turned into a legendary photoshop thread on Outsider?

Hahahah. Jimmy! We lax alumni raised a shtload of money to endow not only the mens lax program but ALS0 12.6 (the ncaa max) women's scholarship. We fell short of Gene's requested $30mm but we put up a nice number. He is a stubborn fool. I used to email him every positive article on lacrosse and its growth in hopes he would catch on, but alas, he is a dolt. I have given up. My only hope is for a new AD.

i would love to see men's lacrosse back at BC, but easily putting 20,000 fans in alumni?!? i dont see that happening...probably closer to a few thousand at most

I know Gene has his detractors, but I personally am a big fan of GDF. He's passionate, driven, and NO ONE loves BC more than GDF. People complain about not having a lax program, but is it really that big of a deal? I would much rather have a competitive football and basketball team than a great lacrosse team.

I'm assuming Jimmy was joking about kids picking LAX at a much higher rate than baseball. Even though I personally find baseball extremely boring (put the pitchers on a pitch clock please), I think there might be 1-2 LAX teams out in the 'burbs but there are hundreds of baseball teams.

I am seeing a lot of kids taking up hockey which is surprising as it is a very expensive sport but truly exciting.

Westcoasteagle and eagleboston - Lax is the fastest growing sport in country. Sure lax has a long way to go to come close to beisbol, but lax is an awesome sport to play and watch.

Lax will even overtake hockey soon for American kids. Really. See the link.

Swimming? Cross-country? Not so much

It's easy to be the fastest growing if your base isn't that high. I dont know if thats necessarily the case, but the saturation level for baseball/football/bball has got to be leagues ahead of lacrosse.

It does seem strange that BC would have as many sports as it does and not have lacrosse. However, it just isn't a high profile sport.

We may not be competitive in other niche sports, but if we get the occasional great athlete (Charlie Davies) it brings back good press for BC.

I also think our breadth of sports is an appealing selling point to students and our athletics program in general. We get to the top or near the top in terms of overall athletic programs rankings, so cutting programs with less popular interest than lacrosse may not be in our best interest.

And as far as the alleged alumni holding out on lax donations...that sounds kind of fishy.

How has so much space been devoted to BC lacrosse? Jeez, this is a niche sport like swimming, track and tennis. It's great for those who participate and enjoy those sports, and even those who watch MLL, but college althletics is focused on revenue generating sports. At BC, that FOOTBALL, basketball and hockey.

I'd too would like to see GDF go, but more for the type of complacency that seems to have settled over the heights than anything else.

When we started our lax town league in Westchester county, NY we had 150 kids 7 years ago.... there are now 850 boys and girls in the program. Baseball coaches are writing emails begging kids to stay. I also coach baseball so I see it first hand. More and more high schools nationally are starting programs but Title IX restrictions are bottlenecking the growth in college. The talent pool is growing so the college game is gettgin better and more competitive as there is a larger pool to recruit. Good article from Washington Post with BC mentioned:
http://www.washingtonpost.com/sports/colleges/2011-ncaa-mens-lacrosse-semifinals-showcase-regional-growth-of-sport/2011/05/27/AG62gpCH_story.html

"The recruiting trend stems from the explosion in the number of young people playing the game. The number of boys’ high school varsity teams has increased 55 percent the last five years, according to the National Federation of State High School Associations. Nearly 325,000 boys 15 and younger were playing the game in 2010, a 9.2 percent increase from 2009, according to U.S. Lacrosse.

Yet, the number of roster spots on men’s Division I programs has been slow to keep pace. The number of schools with men’s teams declined to 54 in the mid-2000s after Michigan State and Boston College dropped the sport, largely over compliance with Title IX, which requires that colleges and universities have equal opportunities and scholarships for men’s and women’s athletes. Butler, which has since made a name for itself as a national basketball power, dropped lacrosse in January 2007."

Calling LAX a niche sport at this point ia little disingenuous. The national champsionship (and at least quarter/semi final) game was on ESPN, can you say that about the other niche sports mentioned here (NCAA X-Country Championship couldn't even get on ESPNU5).

BC is in an incredibly popular LAX region and in the best confrence. Not to mention it is actually a viable crowd draw, unlike anything else mentioned here. It is absoutley absurd there is no D1 team.

neenan said...
This comment has been removed by the author.
10:06 AM

Smitty -- the ignorant comments by ChiFire (super-dumb-ass award), Walter, West, EagleBoston must remind you of dealing with GDF: once an idea is fixed, never look at it again.

And nice summary Smitty. The trend you point to is happening across the USA! I am a little surprised that it is only happening in Westchester in the last few years. I am guessing you must be in Northern Westchester. The southern Westchester towns have had active lax leagues for decades.

Star--ESPN also televised the college wrestling championships. That is quite the niche sport, probably more so than lacrosse. However, lacrosse is also a niche sport. Go west of the Mississippi and few people play. Go out far west (CA) and nobody plays. West coast high schools have more people running track, swimming, and wrestling than they do playing lacrosse. Lacrosse is truly a niche sport.

Bravesbill - did you not read the WP article:

"“College coaches are showing the highest level of interest in players out West, more than ever before,” said Peter Worstell, a Long Island native who starred for Maryland in the late 1970s and now is head coach at San Ramon Valley High outside Oakland.

Worstell founded the “California Gold” showcase tournament in 2008. It already has become an important stopping off point on the summer recruiting circuit for Division I coaches.

“This didn’t just happen,” he said. “There is a reason I didn’t start California Gold earlier. I didn’t feel there was enough talent. But the level of play has exploded. . . . What is happening out here is very, very real.”

You need to do some more research before posting such ignorant comments.

I am from California Smitty. No one plays lacrosse out here, esp. in high school. More people run track or cross country or wrestle or play other "fringe" sports over lacrosse. In fact, more people play roller hockey in high school than lacrosse. Lacrosse talent has "exploded" in the west only because absolutely nobody played it until a few years ago. Face it, lacrosse is a fringe regional sport.

Smitty -- Do not bother arguing with BravesBill, his argument technique is designed to produce santorum.

(google that last term, but beware)

Hey Bravebill, when was the last time you were in Cali??? Yuk Yuk Yuk

i went to high school in San Francisco, and lacrosse was huge. if you know the Bay Area well, almost everyone from Marin County plays lacrosse growing up...

Bravesbill - from the WSJ today:

"While more than four times as many kids play Little League baseball and softball, the growth rates tell a different story. The number of boys and girls playing Little League in these three states has dropped 9% since 2003. Lacrosse participation over the past five years has soared more than 42%. "

Thanks for providing us such a information. We appreciate your information.
Tree trimming san ramon