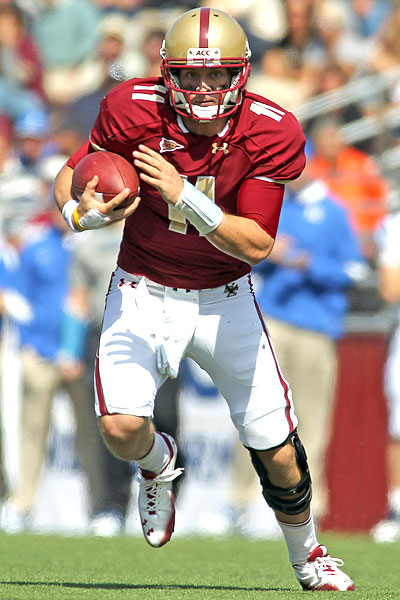 Chase Rettig is coming off one of his worst games and we are facing (in Addazio's mind) the best defense we've faced this year. It doesn't appear like a great time to bounce back or regain your confidence. I don't know exactly what is going on with Rettig. He's always held the ball a bit too long, but now it is becoming a real problem. Is it the new offense? Is it a lack of faith in his receivers? Is he being coached to hold on rather than force a pass? Has he lost his confidence? Or are not enough guys getting open? Based on watching and on what Addazio said, I think it is probably a little bit of everything.

The most challenging part of this slump is that Rettig still represents our best chance of going bowling. We know he can get hot. We know there are winnable games left. And the alternatives are not better. This is not Porter-Ryan or even Shinskie-Rettig. It is much more equivalent to Crane-Davis. The backups can't do the one thing that Chase can -- throw the ball.

The answer is to make the game easier for Rettig within the confines of the offense. To do that, Rettig needs to do the one thing that against his nature -- run.

We don't have a pages and pages of the playbook dedicated to QB runs like we will next year. But there are still plenty of plays where there are running opportunities. There are a few options and plenty of rollouts. Either by nature or by coaching, Chase rarely runs in those plays. However, there is plenty of open space. Early in one of our drives, he handed it to Williams on an option play when he could have kept it for a big gain into huge hole. Some of his rollouts (if he stays close to the line) could go for positive yardage. The biggest area where he could benefit from the run, is scrambling forward from the pocket when no one is open. The opponents are not spying him. On many of these plays he could escape for short gains.

I don't think Rettig is ever going to look great running or break open the game. Running has its risks. Rettig could get hurt, but I think the upside of running outweighs the risk of injury.

Right now we are predictable. Rettig running changes that. On true running plays adding him to the mix keeps the linebackers from crashing hard on Williams. On pass plays he can keep the chains moving and maybe start to get safeties and LBs hedging a bit -- which would help our receivers later in the game. Finally on dropbacks, if nothing is there, running helps his timing. He should take his steps, scan and then throw or run. The waiting is a killer. Nothing good is coming of it. He either forces a bad pass or takes a sack. By pushing him to run, it creates a rhythm or a natural clock in his head to make a decision. It might not lead to big plays and will probably result in even fewer attempts, but we may become more efficient on offense.

Things will probably get worse before they get better. After VT we face the easier part of our schedule. Who knows, Rettig could be fine and start completing passes once again. I still have faith in his arm. I just think we need to use his legs to fix things.
Posted by ATL_eagle at 10/29/2013

We also need more designed pocket passes for him. I think that is a factor you miss out on ATL... he is a pocket passer and we aren't really letting him stay back there in this offense. If Day would stop being stubborn and "play to his players strengths" like Addazio claimed they would, this offense would look more like a hybrid of last years and the option we've seen this year. That would also throw of the Defenses...

That knee-brace says Run, Run Run all over it.

Unfortunately, that knee brace also indicates that Chase might fall down untouched while trying to run.

VT has by far the most talented defense we'll see. Their front 7 is beastly. Think Rettig will have to win this one. Hopefully, Logan throws the ball to us. He can do it.