BC released its 2017 promotional poster. It looks cool enough that it should keep the players happy. As much as the Athletic Department would like this to gain traction beyond current BC fans, the poster remains something only the dedicated care about.

However, the skyline and "Boston's College" slogan point to the Athletic Department's ambition. They want to be embraced locally. A poster won't do it, but the goal is admirable. Winning games will be the best first step. 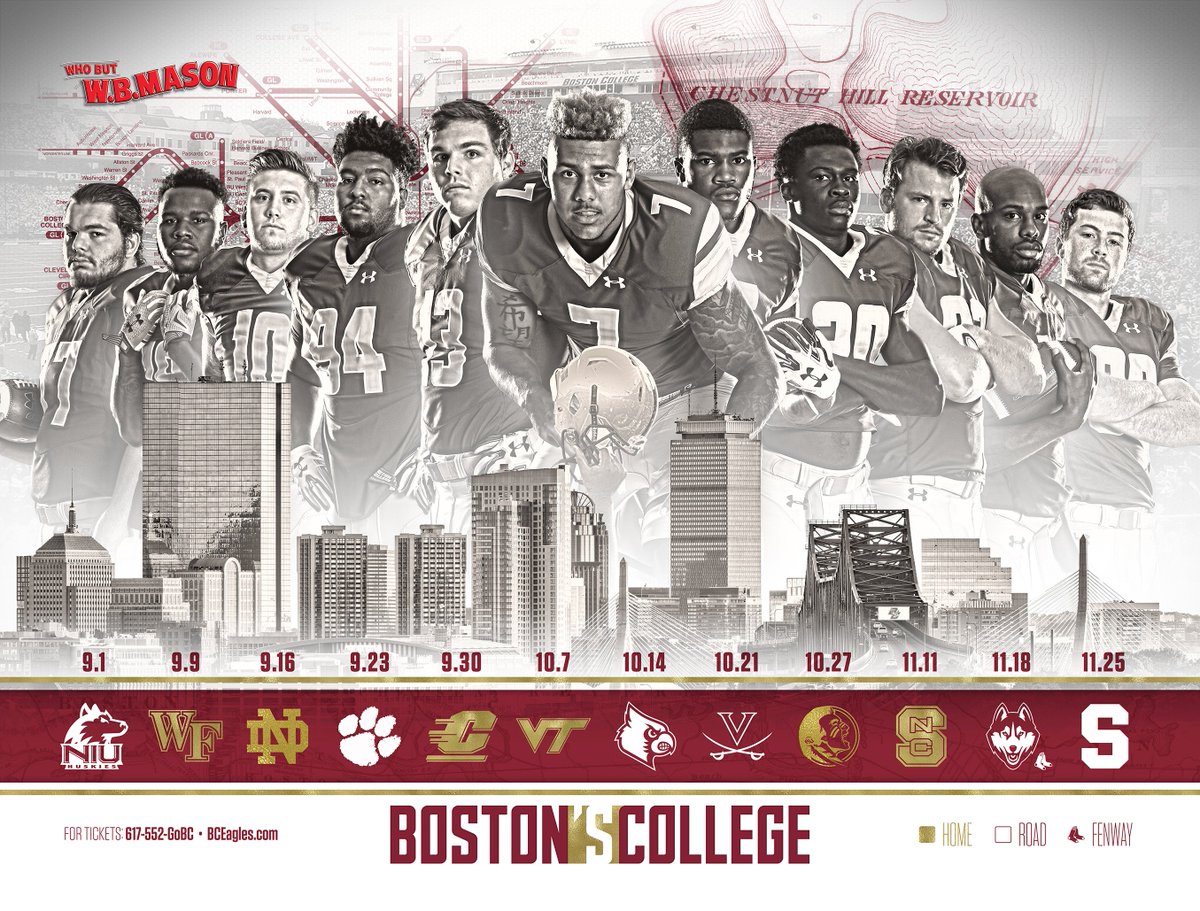 Email ThisBlogThis!Share to TwitterShare to FacebookShare to Pinterest
Labels: Poster

This is a terrible idea. Nothing to be gained from "Boston."

Show our beautiful campus towers, instead of a city that does nothing to benefit us.

Hey Marty, how about you get the students & alumni interested in the team before you go after the rest of the area?

I've thought for awhile that they should be using "Boston's College" in marketing material. Glad to see it.

There is only one marketing strategy worth anything - winning consistently. Until that strategy has been implemented most everything else looks and sounds laughable.

Whoa Nellie!! This is bad. Look at the urban Boston buildings in the poster.

Gee, what major University hsd building overlooking the Charles between the Pru and John Hanvock (or whatever it's called now)

BUis featured in the BC poster. In fact, a few of those buildings might by BU buildings.

Ridiculous to feature BU (or near Bu) in BC poster.

Is anyone in. BCAD awake?

If they want to motivate people to go to the games, they should promote the serving of alcohol. That will motivate fans to get into the stadium earlier instead of seeing most of the fans enter Alumni Stadium midway through the second quarter. I've been a season ticket holder for 25 years, the stadium is usually empty until the second quarter. They need to motivate fans to get in earlier.

Or at least bribe the fans with alcohol.

If you seriously want to get fans in the stands, put Chip Kelly in the center of that poster next season.

They are adding booze this year. (Pathetic that is what it takes)

Sounds like the offense did some big numbers on the defense today.

personal opinion. This is a good move. I really think they need to embrace the other colleges to be BC sports fans. Maybe not BU or Northeastern who we compete against in other sports, but the thousands of smaller schools that would probably love to have a football team and something to do on a Saturday afternoon.

Make a school or alumni tailgate for these schools, provide a bus for the students, and see if some start to show. Get the college kids, you are really Boston's team, whether or not the adults in the city care

Didn't notice that detail, I only focus on the image above. Thank you for sharing!
instagram viewer

Nice article, thanks for the information. You give me some idea's. I will bookmark for next reference.