Like most media mediums, the blogosphere is filled with a lot of derivative junk. In my opinion the best blogs either cover a niche or have a unique voice and perspective. Boifromtroy’s success can be attributed to his quality analysis, steady flow of content and really unique niche. He is a gay blogger who covers USC and a variety of politics and gay issues in California. You’re not likely to find that combo on ESPN.com. Boi is this week’s host of the blogpoll roundtable. Here are my responses to his questions. Check out his blog to read what other blogpollers had to say.

1. Assuming that USC, Texas, Alabama and Virginia Tech all go undefeated at the end of the season, who deserves to play in the Rose Bowl for the BCS Title?

First I don’t think any of the teams will go undefeated. I predict USC losing to ND, Texas losing to Oklahoma, Va Tech losing to Miami and Alabama dropping a few. With all that, I think the question will be which one-loss teams get into the Rose Bowl. As much as it pains me to say it, I think the system will once again punish late losses more than early. My first week in October prediction for the Rose Bowl: Ohio State-Miami.

2. With most of the teams in conference play, which games have the greatest implication in defining the broader BCS picture (at larges, etc.) this year?

Since the BCS started, more than one team has stubbed its toe by losing their respective Conference Championship game. I think all three major Conference Championship games will help clear up the BCS picture this year. In my fantasy world, Florida State, VaTech, Texas, Nebraska, Alabama and Georgia would all enter their final games with perfect records. Imagine the hype.

3. In addition to the BCS Title, the Associated Press, FWAA and several other groups award National Championship Trophies. What award should be given to the winner of the final College Football Blogpoll?

We should commission a trophy by the artist who created this monstrosity. 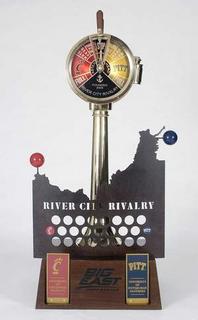