Reaction to the 2020 Schedule

While we knew the opponents prior to Wednesday, the dates and days of the schedule were not known. I would say the fan reaction was mixed. I really liked the set up, but I am not a season ticket holder, so some of the quirks don't impact me. Here are my thoughts:

Things I like:
-- I like starting the season against Syracuse on a Friday during a holiday weekend. While it might hurt attendance a bit, we should get a decent TV slot. I also think starting with a conference game is a great tool to motivate and focus the team throughout the offseason.
-- Thursday night football is not what it once was due to the NFL taking the night as their own. But it is still a spotlight timeslot and we have a long history of playing Virginia Tech on Thursday nights.
-- I am glad they moved the Holy Cross game. Usually we play our FCS opponents earlier in the season. With this being Hafley's first year, I think placing a easy game late in the year will offer him and the team a chance to reboot and reset, especially if things have been rocky.
-- I like avoiding a Thanksgiving weekend home game. There are numerous reasons why it doesn't work. I know BC can't avoid it every year, but any time you can it is god news.

Things I dislike:
-- Three non-Saturday game days. With my personal schedule it actually helps, but in my opinion BC gives up too much in this scenario. Saturday remains the anchor of the college football world. While there are advantages to the occasional odd game, it will always be better to play on a Saturday (for fans and players). TV drives this, but BC needs to put up more of a fight.
-- Lack of November home games. Games in September are great for weather and fans. But we give up any home field advantage the cold New England weather might bring. I also think spreading the games out a bit makes it easier on your season ticket holders.
Posted by ATL_eagle at 1/22/2020 No comments:

How is this not a coaching issue?

Basketball got walloped in the Carrier Dome by Syracuse Wednesday night. The Jim Christian apologists were a little more subdued, but how can anyone not put this on the coaching staff? Every argument leads that way...

1. The talent is young and raw...debatable, but it is the staff's job to shape them and cover up their deficiencies.

2. The talent is not doing what the staff is implementing...then this is a problem and the coaching staff is failing to get them to either buy in or understand what they need to do.

3. The talent is not good...who recruited them?

Now there are other defenses of Christian not specifically related to this game.

2. A change is not worth destabilizing recruiting...In my opinion it is worth the risk. The right new coach has a shot at holding the recruits, plus Christian has shown the best he can do with elite talent is an early exit from the NIT.
Posted by ATL_eagle at 1/15/2020 No comments:

Email ThisBlogThis!Share to TwitterShare to FacebookShare to Pinterest
Labels: BC vs Syracuse, fire jim christian 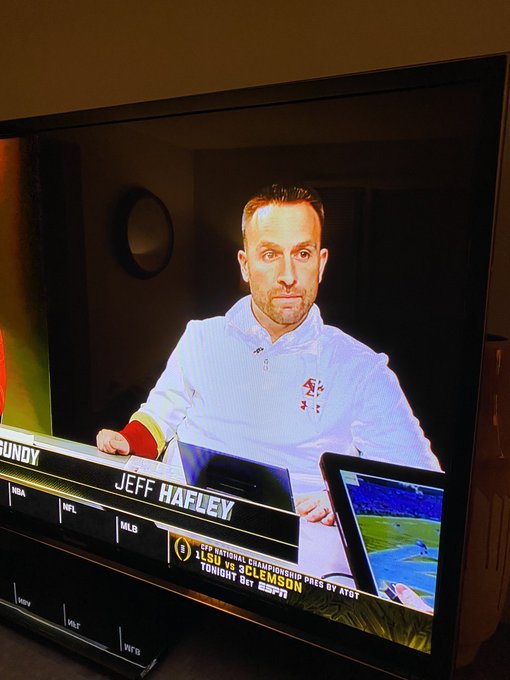 Congrats to the Coach. Hopefully he will be in this game one day and other coaches will be talking about him.
Posted by ATL_eagle at 1/14/2020 No comments:

Hafley lands his first major transfer and has his QB

Jeff Hafley doesn't even have his full staff assembled, but it looks like he already has his QB. Multiple reports confirmed that Notre Dame Quarterback Phil Jurkovec is transferring to BC. The western Pennsylvania dual-threat was a four star QB out of high school and would be one of the highest ranked players to ever come to the Heights. While at Notre Dame, he served as Ian Book's backup and saw limited time in mop up duty.

The questions regarding Jurkovec are how much eligibility does he have and when can he play. The consensus seems to be he has three years of playing time left. As for eligibility, he is not yet a graduate, but is supposedly close to finishing his degree. There are also rumblings that BC will apply for a waiver to play immediately. (The recent trend among QBs is to allow them to play right away.)

In the past there was a certain stigma to transfer QBs. The idea was these guys weren't good enough to play at School A so why should they be good enough at School B. But we saw through Tyler Murphy and Patrick Towles that transfer QBs can contribute right away and fill holes on your roster. I also think that elite QBs recruits jumping around is now common place. The last three Heisman winners were transfers and three of the four playoff teams started transfer QBs.

Jurkovec hardly played at Notre Dame so it is tough for us to know what he really can do. His recruiting profile and athleticism show incredible potential. He has a close relationship with Cignetti so I think there is already an established trust and understanding of what's ahead and what Cignetti envisions. This is all great for BC.

Jurkovec's arrival probably pushes Anthony Brown one step further out the door. I imagine Grosel, Johnson and Valecce are all evaluating their place on the depth chart. If they are smart they would stay at least a season. Who knows what Jurkovec will do and who knows if he will stay healthy.

Jurkovec could turn out to be BC's version of Joe Burrows or he could end up being just another guy. But right now -- one week into the Hafley era -- this feels like a great first step.

These clips of Jurkovec are as a prospect:

Some playing time for Notre Dame this season. (His time starts at 1:41).


That's how you bounce back from the Duke drubbing. BC defeated defending champions UVA at home Tuesday night. And did so without Thorton or Pop. The young guys like Heath and Hamilton (and Hamilton) led the way and go some help from all down the stretch. Even with Virginia took the lead late, there were some big shots and equally big shots. BC is now 3-1 in the ACC. Congrats to all.
Posted by ATL_eagle at 1/07/2020 No comments:

Email ThisBlogThis!Share to TwitterShare to FacebookShare to Pinterest
Labels: BC vs UVA, jairus Hamilton, Jay Heath

After a few weeks of speculation, Jeff Hafley hired his first coordinators at BC. They are Offensive Coordinator Frank Cignetti Jr and Defensive Coordinator Tem Lukuba. Both have a history with Hafley and both come with some questions. Because there is less known about Lukuba and because he is on Hafley's side of the ball, I will deal with him first.

Tem Lukuba
What to Like: He's relatively young for a coordinator. He has multiple years experience with Hafley. He's recruited our region before. He has P5 experience and NFL experience.
Concerns: He has never been a coordinator before. He has bounced around a bit.
Bottom Line: This is a guy Hafley knows and has worked with before. The fact that Schiano brought him from Rutgers to the NFL is a pretty good endorsement. I am really not concerned about him as a coordinator as I feel like Hafley will be heavily involved in that side of the ball. If Hafley likes this guy and trusts him as a recruiter and talent evaluator, than I am on board too.

Frank Cignetti Jr
What to like: He is an experienced college coordinator with many stops and plenty of history (see below). He has worked with Hafley at two different stops. I assume there is a good level of trust. I also hope that he can be someone Hafley can use as a sounding board. There is a lot to take in as a first time coach. Cignetti has been around the block a few times and the hope is he can help Hafley.
Concerns: Cignetti has been away from the college game for a while now, so he hasn't been recruiting lately. I don't know what he has or will change, but Pitt and Rutgers (his last two college stops) ran somewhat traditional pro-style offenses. I know BC can recruit to that, but I was hoping we might embrace some innovation with the new staff. Selfishly I was hoping for someone either from the Mike/Kyle Shanahan school or the Chip Kelly/Ryan Day school.
Bottom Line: Cignetti had been floated very early on as a potential coordinator. There were some other names also floated who seemingly had more upside or excitement. This is a critical position for Hafley and he needs to get it right. Going with someone he knows is fine. Also, in looking at Cignetti's track record, it is better than I realized. He is not a miracle worker, but has done some impressive things when calling plays.


Frank Cignetti Jr's impact as an OC
(For this exercise I used NCAA stats for his time at Fresno State. So that was just raw, total offense. For the other stops I used Football Outsiders analytics of Offensive S&P+)

While not without some ups and downs, Cignetti generally improves on the offense when he arrives and it declines when he leaves. He has produced multiple top 25 Offenses at different stops. He is not someone who dominates at every step, but he is certainly proven capable of handling a P5 offense.
Posted by ATL_eagle at 1/06/2020 No comments:

You know things are bad when the tweets during the weather delay are the highlights of the game. All things considered, we probably would have benefited from this game being cancelled. Cincy outplayed BC, Cincy outcoached BC, the Cincy players seemed to want it more and their team handled the delays much better.

The defensive problems that BC had much of the year -- bad tackling and missed assignments -- were back. The offense was uninspired.

Even Legion Field, with all its history, was a total letdown. Some sports venues add charm with age. This one didn't. With the rain running through all its nooks and crannies, it felt like the house in Fight Club.

The biggest disappointment was the effort of the players. There were many drives where it felt like they didn't want to be there. This was their chance to impress Coach Hafley and most came up short.

None of this means anything, so I suggest everyone put it behind them quickly.
Posted by ATL_eagle at 1/02/2020 No comments: