My tribute to Al Skinner 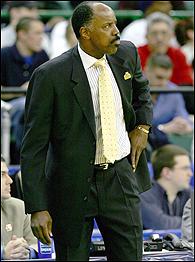 I've been meaning to write this for a week or two and wanted to post this before the game today. Because regardless of what happens today, or Saturday or over the next three weeks, I can say that Al Skinner is the best coach at Boston College and clearly the best basketball coach the school has ever known.

The numbers and accomplishments support this theory -- all-time winningest coach, two Big East regular season titles, one Big East tournament title, Coach of the Year honors, five NCAA Tournament appearances -- but there is more to Al than that.

His demeanor and the way he carries himself support this theory. He’s gracious, mostly unflappable, and keeps the whining and politicing to a minimum (at least until this year’s seeding).

The style of play supports my theory on his greatness. Some people bemoan the Flex. I get excited by it. BC’s offense is one of the best in college basketball and annually one of the most consistent. Watching the guys share the ball and find open men is a thing of beauty. And those who are critical just need to look back to the horrendous “dump it in the post” offense that JOB used.

Speaking of JOB, Al’s accomplishments in the wake of mess left behind by our former coach are a major part of why I think he is our best coach of all-time. Not only did JOB leave the cupboard very empty but he poisoned the well for any successor. Jim O’Brien did his best to let the media and AAU coaches know that BC was a racist institution that didn’t care about basketball (or sports) and that Al would surely fail. (Even once Skinner turned the corner friends of JOB also slipped in digs on Al’s work ethic.) Al’s rebuilding effort was monumental. He had to find players and get credibility back to the program. He took a job that many others turned down. And he did it with quite confidence.

The quite confidence leads me to Al’s biggest strength -- his eye for talent. As it is often mentioned, his BC rosters have been filled with the underrecruited and unwanted. He’s gone into Big Ten, Pac 10 and Big 12 country and found All-American players that were overlooked. His confidence in his staff’s evaluations and his confidence in his system have led to numerous players coming to Boston to prove themselves at the highest level. These kids -- many with chips on their shoulders -- play with a hunger, toughness and flair that is fun to watch. Some can get a little out of hand with their trash talking or celebrations, but can you blame them? They are kicking the asses of people who didn’t think much of them in the first place. And they were given that chance to prove themselves by Al Skinner. College sports is about winning and doing everything in your power to get the latest superstar to your campus. Al’s old-school method of giving kids a chance to work on their game and get an education is what it should be about. I am glad it is what Boston College basketball is about.

Building something from nothing, reaching a high level of performance, sustained excellence and holding yourself as a role model to others. These things are all you can ask of a leader and representative of your community. Al Skinner embodies BC and should be the model for our athletic department.

I want BC to win this tournament for a number of reasons. One of the big ones is to see Al finally get the national credit he deserves. Congrats to the coach on becoming BC’s all-time winningest coach and for being the best coach on campus.

ummmm...not sure that to say to that. i do think that skinner is the best basketball coach in BC history but I have to disagree with some of what you say. One reason that he does not get the national attention he deserves. He is stubbon when it comes to promoting his team. The Athletic Department has been trying for at least 5 years now to do more traditional stuff like a midnight madness event and Al wants no part of it. Also, I know you focus more on basketball and everything but there is no way that Jerry York is not the top coach on campus.

I like your style of writing. You break it down nicely. Keep these informative posts coming!