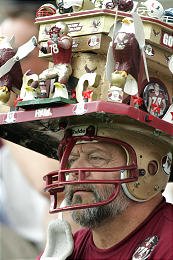 Will Ty Hall get as much TV time as his dad this season?

To expand on my thought from earlier in the week -- I think the offensive line will be fine. Two spots are open and TOB expressed disappointment that no one stood out this spring. However, I think Ty Hall’s uncertain status shows how good things are.

Hall started for BC at Left Tackle in place of an injured Trueblood. The past two seasons he received significant playing time at Right Tackle -- nearly platooning with Cherilus in 2004. Yet now when we have an open Tackle position, the staff is trying him at Center, where he is competing against Kevin Sheridan (who has actual game experience at Center). There are only a few explanations for the move:

1. TOB and staff view Center as critical and want the best talent there AND
2. They feel they have enough talent in Poles and Avenski to competently fill the open Tackle position.

I am confidant in all the guys fighting for position. Their play turned the Clemson game around. I would like to see Hall get a starting spot, but the fact that we have three other guys the coaching staff feel nearly as confident about speaks volumes. TOB might see a void. I see an embarrassment of riches.

I'm going to go out on a limb and say that Ty Hall's dad will replace Kiwi's grandfather as the sappy story of the game this season. (I heard Kiwi's dad was, like, President of Africa or something)

Atlanta-the state of U.S Georgia is one of the most popular destinations in the Southeast to live and to visit, free essays papers depicts. This place is rich with fine foods, malls and history associated with Southern charm and first-class sophistication. Football is a famous sport and Eagles is one of the most favorite teams among the natives.