What did other coaches do after nine seasons?

Nine years should tell you everything there is to know about a coach. Yet I keep wondering if we are ever going to see TOB break through his current glass ceiling and win a true conference title or at the very least, a reputable bowl.

Although history is not always the best indicator, it can be enlightening. So I went back and tried to find coaches in similar situations to TOB and see where they stood through nine seasons and how they fared the following three seasons.

In order to compare apples to apples, I only selected coaches with the following criteria: 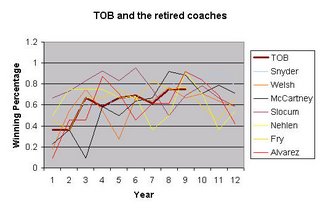 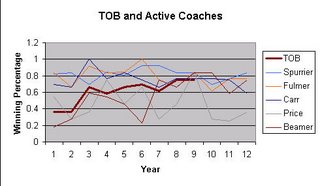 The first real surprise? How few coaches were included on this list. High turnover is a given in coaching. However, in a sample that included 66 schools and a span covering 28 seasons, only 12 coaches lasted at least 12 seasons (some others will join the club in the next few years). That tells me that the odds are against TOB lasting another, say, five years and it also speaks to how unique TOB’s situation is: he exceeds the general expectations at BC, yet doesn’t generate much interest from better programs who might want to hire him away.

Regardless of this select club. One thing is clear -- few schools see an upswing in a coaches years 10th, 11th or 12th season.