Holding no longer a penalty when used against BC 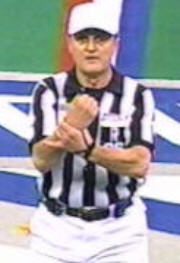 Warning ACC teams: when a ref makes this signal you can bet it is against BC

The Eagle Insider message boards noticed an unusual officiating anomaly. BC’s opponents have not been called for holding since the Virginia Tech game. Shocked, I went back and confirmed. What do you know? The posters were right. So, I went back a step further and looked at all the game logs. Astonishingly our ACC opponents have only been called for holding four times all season (three in the Clemson game). How can this be? Holding is a part of football and, if a Ref wanted, could be called on nearly every play. Why aren’t we benefiting from it? I doubt there is some sort of inherent bias towards BC, but I hope that TOB points it out to the crew handling the Miami game. I don’t want officials interfering with the game, and holding is a judgment call. But there is no good explanation of why it is being ignored to our detriment.

What were the number of holding calls against BC in that same period?

I really hope there isn't some kind of regional bias against BC from ACC officials and referees.

Probably is. But all we can do is play solid football. If that happens, we're assured of finishing the regular-season 10-2 which is a great accomplishment. Honestly, we should be 11-1 (NC State was a joke loss).

Then again, we could have easily collapsed in that second quarter vs. Clemson. Thursday night is gonna be MONEY.