Advice to Jags: Hire this man 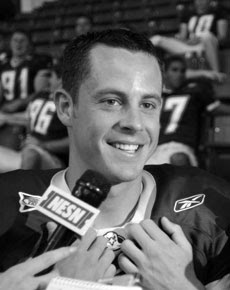 After the Whipple stuff, the second bit of controversy regarding the Jags hire was his staff. Some speculated that Gene wanted a say in staffing. DeFilippo firmly denied this idea during the press conference and said Jags would pick his own staff. Building a staff is tricky. You want a mix of youth and experience. Emotional guys and strategy guys. They must be good teachers and recruiters and hopefully have roots in a particular recruiting region. I am sure Jags won’t have any trouble finding good candidates or the right mix, but that is not going to stop me from making this suggestion: hire Paul Peterson.

I am clearly biased here but I think he is a viable candidate. Here are some of Paul’s highpoints:
-- Currently a Graduate Assistant at BYU, one of the most dynamic offenses in the country
-- Relationships with current players which will be valuable in the transition from TOB to Jags
-- Understands our old offense which will help when teaching our new schemes and terminology
-- Has roots in the West and in the Junior College world, which would be valuable for recruiting
-- Was able to sell himself to BC once...could surely sell BC on the recruiting trail
-- Is an all around good guy and shares Jags' passion for BC

I feel confident that Paul could be a coach for any of the offensive skill positions. I don’t know if Paul would want to leave BYU after only one year. It is his home. But any young coach is looking for a shot and what better place than his alma mater. So give Paul a chance, Jags.
Posted by ATL_eagle at 12/22/2006

your man love for paul pete is a little unnearving.

merry christmas to you and the fam.