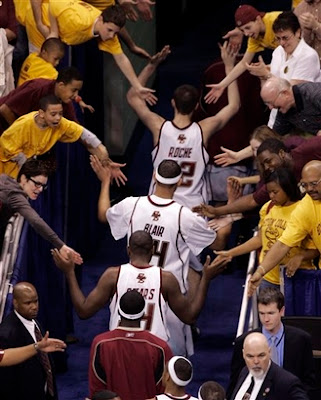 That's it boys. Take 'em one at a time

Very good game and good start to the Tournament. As I said before the tourney, unless you’re an elite team, much of NCAA tourney success is about matchups. We matched up well against Texas Tech. I also think we matchup well against Georgetown, but I’ll leave that for Friday’s blogging. The Big Three all played well. I could praise them but I’ll use the space below to focus on the less obvious things about the win:

Likes
-- Defensive Rebounding: We grabbed 24 defensive boards to their 7 offensive boards. This really came into play late in the second half when we needed stops and we started building a small lead.
-- Marquez Haynes: I haven’t mentioned Haynes much this season. He has been a nonfactor. But with Texas Tech not pressuring Haynes could be on the floor for long stretches. He didn’t light up the stat sheet but his defense was stellar. He shut Jackson down in the second half. We need and have needed a defensive specialist for a while. Hopefully Haynes can turn it on over the next three weeks.
-- Defensive variety: We played the amoeba. We played straight man. We played 2-3. Hell we even threw a little box and 1 at them. Who says Al doesn’t make adjustments? The defense was not great, but it did enough. Against Georgetown we’ll probably need to get creative, so I am glad we experimented today.
-- Johnny Oates: The first half was his best half of basketball this year. This is three straight solid outings for the big guy. His defense was somewhat lacking in the second half, but he played well…again.


Dislikes
-- Dudley’s foul trouble: This has been brought up by everyone. Terrible decision by Al and terrible play by Jared. I could excuse bringing Dudley back in if we had fallen behind, but why risk it when the team was hanging on? Dudley also should know better. His third foul was a flop. You can’t take that risk at that time. We are lucky the foul trouble never became a factor.
-- Blair’s turnovers: Blair played well, so this is somewhat nitpicky, but he’s got to be more careful. Two of his turnovers came after he made a big defensive play.
-- Perimeter defense: What is the one thing Tech’s big men do well? Shoot the 3. Yet we gave them way too many open looks from beyond the arc.


It is going to take another effort like that from everyone to beat Georgetown. But it can be done.
Posted by ATL_eagle at 3/15/2007