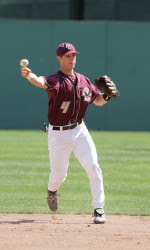 While most of the football team is back on campus working out, one player isn't there. Punter Johnny Ayers, who is also a member of the BC baseball team, is on the Cape playing in the prestigous Cape Cod Baseball League. Ayers is playing for the Yarmouth-Dennis Red Sox. His BC teammate Terry Doyle is also on the Sox.

A few other Eagles are also involved in this season's Cape League. Adam Crabtree is pitching for the Brewster Whitecaps. The Harwich Mariners are run on the field by BC assistant coach Steve Englert '87 and in the front office by BC grad John Reid.

If you're on the Cape this summer and at a Harwich, Yarmouth-Dennis or Brewster game be sure to give these guys a "Go BC!"

Email ThisBlogThis!Share to TwitterShare to FacebookShare to Pinterest
Labels: baseball