Is Alumni OK? Sifting through stadium myths and perceptions 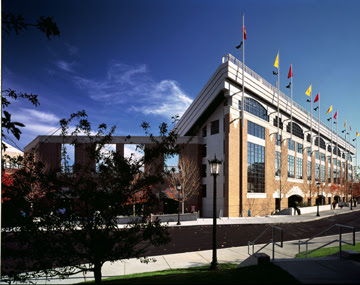 One of the common digs rivals make about BC is our “rinky dinky” or “high school” stadium. While I love Alumni, I recognize that it is small. But is size a factor in success? In general, I don’t think so. Extra seats do generate extra revenue but BC, and other schools like BC, have done a good job raising money from other sources to hire top staffs and build new football facilities.

Here are some schools smaller whose stadiums are smaller than Alumni’s 44,500 capacity who have gone to BCS bowls in the last ten years.


Schools only slightly bigger than BC have not used seating capacity as a crutch either. The following all have gone to BCS bowls in the past 10 years.
Oregon St -- 46,000
Maryland -- 51,500
Oregon -- 54,000
Colorado -- 53,750
**Please note that all of these schools are public with much larger alumni bases than BC, yet no one ever gets on them for not having bigger stadiums.

BC is in a very unique position of being a private school in a pro sports town (have at least 1 one NFL team in their immediate market) with an on campus facility. In BCS conferences, only the following schools also fall into that category.

The other critique from our rivals is that “BC can’t even fill its own stadium.” Our capacity has been very strong the last decade. In 2006 a monsoon during a game against MAC basement dweller Buffalo brought down the average attendance to 38,483 or 86% of capacity. Nothing to be proud of, but certainly not a sign of overall support for the program. Take a look at all BCS programs that play in pro sports towns and how they fare when it comes to percentage of seats sold (all averages courteously of Phil Steele’s preview).


As you can see, BC is within many of our peer programs.

We don’t have a huge stadium, but Alumni is modern with great football-only facilities, has field turf and is in a major city. There is no reason the stadium should serve as an excuse or hindrance for BC’s success and Alumni should never be used by rival fans and recruiters as a point of embarrassment. As the Under Armour ads used to say “we must protect this house!”
Posted by ATL_eagle at 7/09/2007

Alumni is a great place to watch a football game, it really is. Some of the fans could be a little more active--to put it mildly--but it's really a great setting for football.

Of the schools you are comparing it to, it's far better than Wake, Vandy and Northwestern in terms of venue and atmosphere. From the looks of it--I've never been--Maryland and Oregon have both had impressive improvements in the past decade.

The stadium I think it's most similar to--visually, and everything else--is Georgia Tech, and that place's size is distorted by the enormous second deck behind one of the endzones that is always empty. Both can special places to watch games--ask any Clemson fan that came up to BC last year.

It's not Death Valley or Happy Vallue, but it's never going to be that. I would venture to say that filling in the corners of Alumni would have absolutely no effect on recruting.

Also, in terms of uniqueness...BC was one of--if not the--first to go with the solid color student section, which has certainly caught on throughout the country.

Oregon is also one of the hardest places to play in the Pac-10, so there's no reason we can't be loud and have a great home field advantage.

LA, I kind of made up the designation, but my point was urban based schools where there is a lot of competition for the sports and entertainment dollar.

i understand...no disrespect here...it's just that your MUCH more likely to see a Trojan/Bruin (more often Trojan) banner/license plate holder/flag in this town than any other sports team...these people predominately look forward to Saturday football

Duke is not in a "pro sports town"; Duke, UNC, and NC State are all about three hours from NFL football in Charlotte. There is an NHL team in Raleigh, but that would put NCSU on the list before it would include Duke.

Unless you have evidence that Coach K is paying his basketball players, in which case you should forward it to the NCAA's enforcement division at once.

You're right. I'll take Duke off.

Why is Wake on the list? What pro team plays in Winston-Salem?

Since the "Carolina" market should only be Charlotte, I've taken Wake and Duke out of the final chart.

The problem is not the stadium its the people in the stadium. Too many Whalepants old timers.

I went to a game at Blacksburg and there was a 70 year old alumnus sitting behind me who stood the entire game and cheered as loud as most students.

Too many of the fans at alumni spend the entire games sitting on their hands. Its starting to change but its going to take time.