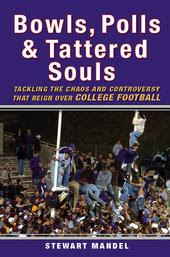 As some of you know long before my blogging days I worked at CNNSI.com. One of my colleagues was Stewart Mandel. Stewart’s first book "Bowls, Polls, and Tattered Souls: Tackling the Chaos and Controversy that Reign Over College Football" will be released later this week. His publisher was kind enough to send me a copy earlier this summer. While I am biased, I think any college football fan and regular reader of Stewart’s work on SI.com will enjoy it. He takes on all today’s college football controversies in a chapter-by-chapter format. This approach makes the book a quick read yet also gives some unique takes on seemingly stale topics. I think BC fans will especially enjoy the chapters on the conference shuffles and the breakdown of Notre Dame lore and hype.

Even with the season just around the corner, Stewart took some time out of his promotion schedule to answer a few of my questions about the book. In our exchange he also explains his coverage of BC and how he thinks our season will end.


ATL_eagle: The book covers a series of current hot topics from college football each of which could have supported its own book. Why did you decide to go in this direction instead of doing a deep dive on one topic (say a book on recruiting or the conference juggling, etc)?

Stewart Mandel: I think one of the trickiest things about covering a sport as closely as we do, 365 days a year, it's easy to lose perspective as to the stories that are really, truly important to ALL college football fans as opposed to those that you or I may find equally interesting but in reality, appeal mostly to a small core of absolute diehards. You're right, nearly all of these topics could theoretically justify a book of their own -- and in fact, my good friend Bruce Feldman is doing just that with recruiting -- but in the grand scheme of things, I think the number of people who'd want to read a 300-page book about poll voting or conference expansion is relatively small.

By using the format that I did, I feel I was able to hit on a wide variety of topics that appeal to a more comprehensive audience, regardless of affiliation, and to be able to do so in the same kind of conversational yet (hopefully) informative manner in which I write on SI.com.

There are plenty of great writers out there better suited than me to write a 300-page expose on the BCS. This book, however, more uniquely suits my chosen voice.


ATL_eagle: I felt the strongest portion of the book was the chapter on recruiting. You use history and anecdotes to prove how inaccurate the rankings are beyond the top 100 or so athletes. What you didn't touch on is how coaches feel about the process. The internet recruiting machine/monster wouldn't exist if the coaches didn't feed info to the gurus and play into the recruiting sites, yet I constantly read and hear about coaches hating the recruiting sites. Why don't they cut the sites and their writers off and not play into the kids egos or desires to get more stars?

Stewart Mandel: I don't necessarily agree with the first assertion. There are numerous coaches quoted in there, and toward the end, I talk about how, for all their complaining, most coaches (assistants more so than head coaches) actively consume these same recruiting sites and, in many cases, contribute to them. Like with anything else in this sport, coaches are always looking to gain that extra edge, and at this point, the recruiting sites are so pervasive and so influential that a coaching staff would be shooting itself in the foot if it didn't try in some way to use them to their advantage (whether by feeding info or learning info from it themselves). To answer your last part, I'm sure there are plenty of coaches who would love nothing more than to "back off" some of the more ego-inflated kids -- but then they lose risking them to someone else. And that's a risk they can't afford.

ATL_eagle: While I tend to be an apologist for you on the blog and BC message boards, a lot of BC fans dislike you and your national beat colleagues. Either BC doesn't get enough respect, coverage, or gets labeled with the same recycled cliches about the program. In your and other beat guys defense, there is no way you can be an expert on every BCS conference team, especially when you are focused on the top teams. With that in mind, why don't you toss up your hands and say "I don't know that much about this BC team" or "honestly I've watched about 15 minutes of Ole Miss this year" or "I didn't see Coach A's boneheaded call against State U because I was at the Florida-Tennessee game" instead of trying to give analysis that a smart fan of a out of the spotlight team could see right through?

Stewart Mandel: In my experience, there isn't a single team in the country whose message-board/blog fans feel the national media gives them their due. I even get complaints from fans of teams like USC and Florida, who have been pretty much non-stop media darlings the last few years. Someone can always find some evidence they're being "slighted" if they go looking for it. But I truly don't mind such comments, and in fact I completely understand them. This is the only major sport where the media plays an active role in deciding the outcome. Why wouldn't fans be paranoid about getting screwed over?

As for the second part, you have to keep in mind that, with all due respect to BC fans -- or Ole Miss fans, or Tennessee fans or any other school's fans -- at the end of the day, they represent a fraction of my audience. When I write something like the Mailbag, it's imperative that both the questions I choose and the answers I give are of interest to a general, national audience. For instance, I have a question in this week’s mailbag about BC. I wouldn't imagine that anything in my answer will come as "news" to anyone who follows BC closely -- but it might to all the other fans out there. I fully concede that any BC fan who follows the team closely enough to read a BC blog every day probably knows the inner-workings of that team far better than me. However, by maintaining a general knowledge of not just BC but 70 other teams, it allows me to compare BC to those other teams, analyze their general place in the landscape and offer a truly detached, outsider's perspective that's hard to maintain if you're a beat writer or blogger who spends all day, every day primarily following one team.

ATL_eagle: Regular features of yours that always get a lot of play on the BC boards (outside the mailbag) are the picks and bowl predictions. I know it's early but predict the following games (NC State at BC, BC at Notre Dame) and tell us now what (if any bowl) BC plays in?

Stewart Mandel: Yeah, I'm not big on picking specific games more than a week out. I'll just share with you my general prediction for BC's season in general: They're my favorite to win their division (though I fully anticipate another logjam where there's some sort of tie for first and they happen to win the tiebreaker), which would likely mean winning about nine regular season games. As for the bowl, as you well know, they're not exactly a favorite of the upper-tier ACC bowl partners in the South, so if they don't win the title game, they would likely go somewhere like the Music City Bowl (while the Gator snaps up FSU, the Peach Georgia Tech, the Champs Sports Miami, etc.)
Posted by ATL_eagle at 8/22/2007

Great work on the interview. Mandel's definitely the best college football writer on the major sites, and he always is fair to BC. In particular, I remember him calling out the Butler/Kiwi play as one of the more disgraceful acts in years in college football while many in the national media were mum on the issue.

If as predicted, BC wins the Atlantic but fails to win the ACC Championship, and then proceeds to be picked for the Music City bowl (which, mind you, is the #5 bowl in ACC land), this would be a huge disappointment for the school and the fans.

The ACC runner-up can't fall below the Music City bowl because of the one loss rule instituted after we went to Boise in 2005 as ACC Atlantic division co-champs.

This does of course assume that the stars align and there is a logjam at the top of the ACC standings where FSU, Miami, Georgia Tech are all within 1 loss of our record.

If this happens though, I'd have to say that BC faithful should be extremely disappointed with the conference. I would question whether the move to the ACC for football was really worth it given that we continually get passed over for the ACC bowl games we deserve to be in given a 9-10 win season. This would be very disheartening to fans, bad for recruiting, bad for bowl travel, and the vicious downward cycle would continue, i.e.

BC gets passed over for the better ACC bowl --> less BC fans attend the bowl game --> perpetuates the perception that Eagles fans don't travel well.