A tale of two offensive lines

Despite the penalties on Saturday night, BC’s rebuilt offensive line deserves credit. They took on the most aggressive front seven in the ACC and held their own. Watching the BC line improve each week and absorbing all of the problems the Notre Dame Oline is having, I thought I would use the two units as an example of how inexact recruiting rankings can be and how important coaching (and position coaching) can be.

For those BC fans who are unfamiliar with the recent Irish struggles, you can get a good overview at Blue-Gray Sky. In summary, their line is porous, seemingly lacking in basic fundamentals and the main reason the Irish cannot move the ball.

I am shocked on two fronts: one the Irish line is stocked with kids who snubbed BC and two, I grew up watching the Parcells’ Giants and actually like Charlie Weis. How can he let this happen?

Weis apologists are blaming Willingham and saying the Oline is very green, very young and not that talented. I don’t buy it. Look at Notre Dame’s Oline starters and then compare it to BC’s Oline. (note: I used “year” because BC and ND classify redshirts differently.)

*BC was not listed in his final four, but I believe we did offer

For non-BC fans who might read this, let me give you a little background. Cherilus has been a very good four year starter. Poles started last year, but was yo-yoed in and out of the games and has been very inconsistent prior to this year. His early play has been one of the bright spots of the season and new staff. Tennant, Ramsey, and Castonzo were all Midwest kids with MAC and/or lower BCS offers.

The Notre Dame line has had the same position and head coach for three seasons. The BC line has learned a new scheme, gone through two position coaches and a new head coach all in the last nine months.

Notre Dame’s green line has a combined 61 starts (through Saturday) and averages three years in their program. BC’s line, which handled the same Georgia Tech team that walloped ND’s line, has 65 starts and averages 3.6 years in the program.

I will grant the ND fans that Matt Ryan can make everyone around him look better, while ND has rotated QBs all season. In the end, this proves that recruiting rankings are only part of the equation. You also have to coach kids up and give them schemes in which they can succeed. Hats off to Jags and their most recent position coach Jack Bicknell for bringing this unit together and making the transition relatively seamless despite all the hurdles.


For those of you who like OLine play, here are few shots from Saturday courtesy of TokenMom. 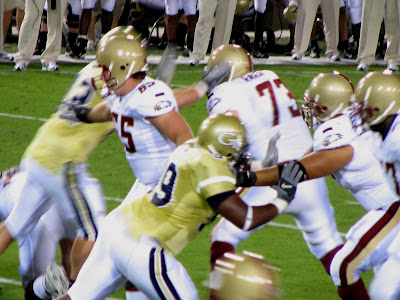 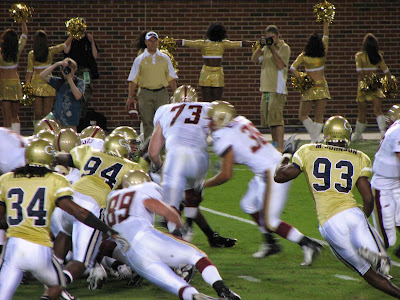 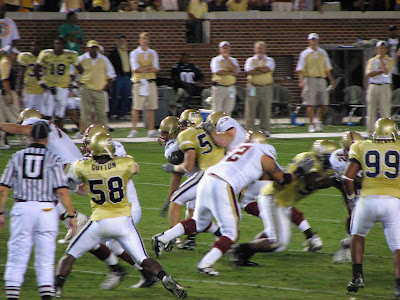 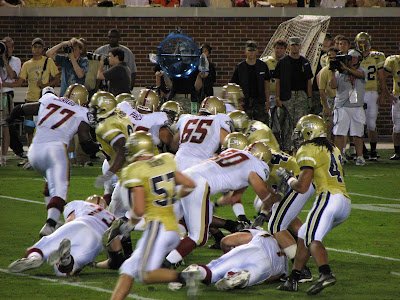 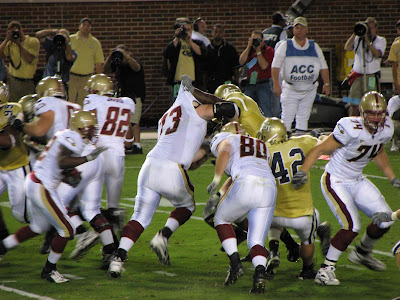 I think one of the things that I'm learning is that when it comes to offensive lines, experience trumps recruiting star every day of the week. That and recruiting ranks of OL is the biggest crapshoot in the crapshoot world of recruiting rankings. Just look at Pat Sheil, who I recall was ranked fairly high (I know ND wanted him) but is on the bench at BC.

As for the Willingham stuff, at least in my case we were noting that his failure to recruit OL means Charlie really doesn't have any other choice but to keep throwing out the same 7 guys. Weis is on the hook for the crappy performance of the OL obviously, but ND fans are lamenting that Ty didn't leave any other upperclassmen options (both juniors committed to ND after Ty was fired)

I think the 'blame Ty' stuff is a bit overblown, both by some overzealous ND fans and by those who want to paint all ND fans as Charlie apologists. Ultimately everything that happens to the team this year is his fault and responsibility.

I guess I'll strongly disagree with the basic premise of this post - that BC's offensive line dominated GT's defensive line. BC didn't run the ball against GT well and BC's tackles got consistently beaten off the edges in passing downs - finally resorting to simply tackling Michael Johnson as he rounded the corner. Honestly, I'm not sure BC's o-line did much better against GT than ND's did.

Now, BC schemed MUCH, MUCH better than ND. BC's running backs did a terrific job in blitz pickup (maybe the best I've ever seen) and BC always kept at least one extra blocker back for protection - and they executed the blocking schemes to perfection, not forcing the backs to block defensive linemen. The only major protection breakdown was in the first half when a back got stuck on Robertson off the end and gave up the sack/fumble. ND seemed to continually have backs on linemen and never had enough blockers back, it was like they didn't know their protection schemes at all.

In short, BC executed their blocking schemes perfectly, kept an extra man back and flatout tackled their men if they got beat - taking the 10 yards over watching Ryan bounce off the turf (a good tradeoff the way he was throwing the ball). In short ... they looked way better coached than ND. Way better.

Actually Nathan, I think your comments are in agreement with the point that Eagle in Atlanta is trying to make. It seems that the Charlie Weis apologists are blaming poor Oline play on the perceived lack of talent due to Ty Willingham's recruiting. Eagle is arguing that recruiting is only one piece of the puzzle. According to the amount of experience and quality of recruits, BC has a similar Oline to ND. But due to truly outstanding coaching in a very short period of time, BCs line has had success so far this season. ND's line has clearly struggled, and a good part of that blame must fall to the current coaching staff. As you said, BC looked way better coached against GT.

-Matty Ice gets press on ESPN.com regarding the Heisman

-Also on ESPN.com, Ivan Maisel and Mark Schlabach have us in the Orange Bowl.

Willingham left the cupboard dreadfully understocked of offensive linemen, so most of the competition for playing time has come from first- and second-year players who don't have the experience to start yet.

Weis badly misread this team in the spring and fall, thinking that they were more prepared to play than they were. In consequence, he tried to attack the first three weeks by scheming, not realizing (until it was amply demonstrated on gameday) that the players' fundamentals were not strong enough to execute the schemes. (Willingham's recruiting malpractice bears on this, too, as Weis was reticent to go full speed in practice and risk injuries to players he couldn't afford to lose thanks to the paper-thin depth on the squad, but we still put a lot of that on Weis because the risk of practice injury isn't that serious.)

After the Michigan game, Weis stepped up the speed and contact in practices, and the team's play has been slowly coming around. We would have preferred that it not take so long (and not have put the team so far behind), but unlike certain of his predecessors, Weis is at least willing to recognize problems and adjust his approach when his approach isn't working.