Announce our presence with authority! 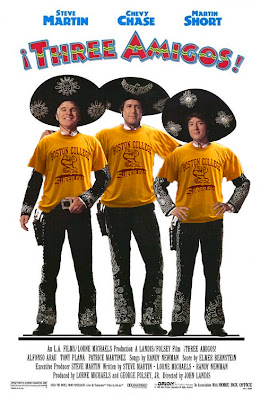 Photo courtesy of the Ryan for Heisman Blog

ACC Championship Game ticket sales are going slower than any of us would like. Hopefully the donation push will get us to 10,000. To make this a successful, program changing trip we really need the 6,000 or 7,000 of us who actually attend the game to make our presence felt. We need the locals to believe the BC fans were everywhere...eating, drinking, and spending money. We need the Jacksonville Visitors and Convention Bureau to give BC a ringing endorsement that Gene can use to shop us around to future bowls. How can such a small group make a big impression? The Three Amigos approach. For those of you who aren’t familiar with the classic comedy, here is summary of the brilliant denouement:

The Amigos organize the villagers, using their sewing skills to create an army of "Amigos" by replicating their mariachi costumes. The villagers defeat the bandits by appearing clad in the costumes and shooting from all sides, creating the illusion that the Amigos are everywhere. Thereafter, the Amigos ride off into the sunset.

The few of us there have to act like many. Wear BC paraphernalia everywhere you go. When you check in to your hotel, let the front desk know that you are in Jax to support the Eagles. When you see another BC fan, give a loud “Go BC!” Write “Go BC” on all your cash. After you sign your credit card receipt add a little “Let’s go Eagles” to the slip. Hit the Landing and sing “For Boston.” If you are slipping in a round of golf, bring your BC headcovers. Anything and everything counts. Make an impression. Then, like the Amigos, we'll ride off into the sunset after our upset victory.
Posted by ATL_eagle at 11/27/2007

I wholeheartedly lament the LSAT being the same day. Maybe's it'll help my admissions chances at BC Law if I put Hokies Suck somewhere in the writing sample.

WEAR GOLD to the game. Maroon doesn't show up on TV. The TV cameras were all over ASU's gold-wearing fans in their game against UCLA a few weeks back, but a similarly-sized BC contingent at Clemson was pretty much ignored as the maroon just blended into the crowd.

Maroon is especially bad in this game as it's also one of VT's colors.

Just bought my ACC ticket and donated it.

If we all did this, BC wouldn't be in this mess. Buy the damn tickets if you can't make it. I'm sure many, like me, live in California thus making such a cross country trip cost prohibitive.

If you can't go, buy the tix anyway and donate them.

Who's the best academic team in the Top 25?

Matty Ice was named a finalist for the Walter Camp award... hasn't the winner of this gone on to win the Heisman every year?

Also, is anyone else staying at the Super 8 in Jacksonville? It was the cheapest place I could find and it's only 2 miles from the stadium... just wondering...

Just bought 2 tickets and donated them. Would love to make the game but with a 6 month old it was too hard to line thigs up. I was up at the Miami game this weekend and most of the folks in my section are holding out on going to JAX. Most said that if they won and go to the Orange Bowl, then they would make the trip. I wonder how many others feel the same way and if that is contributing to the low interest in JAX. BTW, I love the 3 Amigos reference. "Sew like the wind"

What gets me is that there is no Orange Bowl without a victory in Jacksonville.

My attitude is - good to see you, but where were you when we needed you? Maybe that's unfair - but I'm only trying to point out that this Saturday IS THE MOST IMPORTANT GAME.

For all those purchasing and donating tickets, as I did also, in addition to the ones I will use for the game - thank you very much. This really helps out and shows that you are true BC fans.

I readily understand why people cannot attend. Your support is great.

what's wrong with the school not buying the remainder and donating them?

The school and or the Fenway Sports Group or whatever they are called.

There's no question we could do a great job on this.

Fenway Sports Group strives to develop and implement results-oriented strategies that meet our clients' global business needs. We immerse ourselves in our clients' business and we are committed to integrity in our relationships with customers, clients and partners. It is our goal to consistently deliver superior customer service infused with a spirit of entrepreneurship and innovation.

In March of 2004 the New England Sports Ventures ownership established Fenway Sports Group ("FSG") and appointed Mike Dee as the President. Shortly thereafter FSG entered into an exclusive sponsorship sales agreement with Boston College - the first of many relationships established by FSG with blue chip brands on and off the field. Today FSG is a thriving business focused on creating unique business opportunities with blue chip brands throughout the world.

I love the academic article Stephen. We won by a landslide!

On a semi-important note, I want to know if the people who take these tickets are forced to wear gold? I think we should mandate it.

For anyone going to JAX and who previously had tickets to the garden for BBall on Saturday, I'm a student and will be going to that game after hitting up one of the bars in that area for the ACC CG.

I think that we should organize a BC game watch for those who plan to watch the football game and then walk over to the Hall of Fame classic. Further, anyone who'd like to donate tickets to me for Bball I'd be happy to accept. I'm a senior and its expensive to have a mod. I am so pissed I have academic commitments due early that next week or else I'd be in Jax myself. What an unfortunate week to hold the biggest BC football game of my lifetime.

dude if you manned up and went to JAX, i would donate you a football ticket in a heartbeat. if I was still in school and did not have an athletic commitment on that date there is no way in hell you could keep me from that game. i rearranged a CSOM midterm back in the day so that i could make a flight out to ND for the Green Jersey game. do your work on the plane and in the hotel. or have a buddy drive you down and do work in the car. someone will donate him a ticket too. poor you in the mods, that is why they have Natty Ice and liquor stores in NH. step it up.

Give me a break man. There's no need to be negative and take away from the great positive vibe this thread is generating. All I said was simply that I would appreciate a ticket donation from any people who were planning on going to the bball game this weekend but can't now because they are going to Jacksonville. If the tickets are otherwise going to be unused, holla at your boy.

Furthermore, for a school that prides itself on academics and their relationship with athletics so much, I'm sorry you can't understand my situation--it's the perfect storm of work. Finals, papers, a good part of my thesis due early next week, you name it. Wholly unfortunate, but true.

And as to your Natty Light/NH suggestions, that's already being done (Blanchard's is cheapest, with 30s of Natty for 10.99 + dep haha). We've given away more than the equivalent of the $$ for a mod lot spot in booze already. We're doing our part, don't worry. Would be a lot cheaper if they allowed kegs back on campus though!

Steve - we've got a group of about 10 of us going somewhere to watch the game at 1:00 then heading over to the basketball game. I was going to post something similar...would be nice to get a big group somewhere and watch the game. Let me know if anything comes together and I'll do the same.

Just got into the website and donated a ticket for the cause. I'm hoping more people that can't spend all of the money or the time to get to the game do the same. I think it's fairly sad that we have so many Alumni throughout the Northeast and the country who introduce themselves as Eagles and brag about their affiliation with BC, but then aren't willing to help us sell out an ACC Championship Game. It's not like we have an unreasonable allotment of tickets to sell. I live on Cape Cod where the Alumni Club is generally 50 years of age and older. Where are these people when we really need the push of their money and influence? I'm just hoping our younger Alumni and current students can put together enough of a push to give us the opportunity, when we are older and more settled, to go to MEANINGFUL bowl games. It would be a shame to see a group of Seniors that has meant so much to our program not get to play in a meaningful Bowl Game because our proud as peacock Alumni can't scratch together the money to sell out the most important game we have played in at least the past 23 years. Like all of you, I am looking forward to a victory, but don't want a great group of football players to be punished severely for losing. We are on the cusp of potentially big things here at Boston College and stand-alone football games mean more to recruiting than anyone can even begin to imagine. The ACCCG and Orange Bowl obviously fit that bill, but so does the Peach Bowl. The more exposure of our team and our way of doing things the better. Go Eagles!!!

Some of you said you were looking for a place to watch the game and then go to the BBall game. Well the Official Game watch is at the Greatest Bar. I went to the one for the first VTECH game and it was a lot of fun. I recomend going there.

Attention Chicago based BC fans...

Flights to go down to Jax Saturday morning and come back Saturday night just dropped to $210. That puts it in my ballpark! Check out AirTran.com

The one-way return flight on AirTran leaves JAX at 730 that same night for $79 a piece.

Pretty reasonable, even for a broke 2007 grad like myself.

any students/broke bc grads looking for a cheap place to stay joine us at the scottish inn- its only $80/night and they claim to be a 10 minute walk to the stadium/bars... you should check out the reviews on trip advisor before you book because it sounds like a total dump but its so cheap and seems like a great location