Has basketball bottomed out? 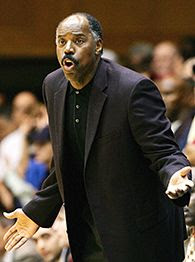 To show you how long it has been since the basketball team struggled so much, chew on these facts:
-- BC hasn't lost six consecutive games since 2000
-- BC hasn't had a losing conference record since 2000
-- The fewest wins since 2000 was 19 in 2003. BC would have to run the table on the remaining regular season games just to match that total.


BC now stands 12-10 (3-6 in the ACC). There are seven regular season games and at least one ACC Tournament game remaining. BC could conceivably losses all eight. I don't think they will. I also think this last stretch of games on the schedule will be different. Take a look at who we play.

Outside of UNC, all those teams are a lot like BC -- flawed and capable of an off night. If we play like we did against Duke, all those games are winnable. If the team can go 4-3 down the stretch, we will get invited to the NIT. Anything less and we are probably looking at no postseason. The postseason isn't my biggest concern either. If this team cannot improve over the next three weeks then we seriously need to adjust our expectations for next season and this group of freshmen.
Posted by ATL_eagle at 2/12/2008

Email ThisBlogThis!Share to TwitterShare to FacebookShare to Pinterest
Labels: basketball

It didn't give me any pleasure when I picked our team to go 5 and 11 in the ACC. I hope I'm wrong, but that's the way I see it.

A lot of good things came out of that Duke game, so maybe they will go 4 and 3 to finish 7 and 9. But I view this as a building year, and I hope we have some very good players coming in.

The team will be fine next year. With a year under their belt, they will be better. A season like this was expected, so for you to sound so surprised/troubled is a bit naive on your part.

no chance a team this young plays to get into the nit.

ps Tyler Roche is an abomination. Honestly, he can't shoot, he can't dribble, he can't defend. what in the hell does he contribute?

Here's a preview of tonight's matchup against NC State from http://pregame.com.

Defense and rebounding have been problems for Boston College, as they’ve given up 79 points a game against league opponents. Also, ACC foes have out-rebounded BC on the offensive boards, 146-96. EDGE: NC STATE

Boston College has a 5-1 all-time record against North Carolina State, including a 1-1 mark in the RBC Center. SLIGHT EDGE: BOSTON COLLEGE

Boston College is 8-3 ATS in its last 11 Thursday games.

The OVER is 10-3 in Boston College's last 13 Thursday games.