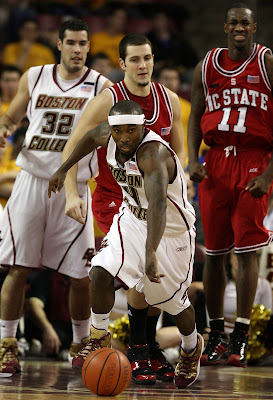 Is there anything more romantic than a burger on the grill, some Valentine's candy and a BC victory? My wife knows me well.

Good effort and a good win. There are still some areas for improvement, but it's a start. Here are my thoughts. Leave yours in the comments section:

Likes
-- Rice's smart play. He shot well, but there was more to his great effort. The offense performed better because Rice picked his spots and worked to get other guys good shots in the flow of the offense. Rice also avoided foul trouble after getting three in the first half.
-- Sanders’ rebounding. I've bemoaned the rebounding effort the past month. Sanders is one of the few natural rebounders getting serious floor time. If he can pick up the slack for the big men, things will get better.
-- Oates! He's on the roll of his career. Would anyone have predicted this in November? His minutes are productive and even his defense has improved.

Concerns
-- We are still turning the ball over too often. Rice was given the TOs, but part of it is on his teammates. There are times when they are not ready for the passes. Our offense only works with patient and smart passing.
-- Transition D. The defensive rebounding was better, but there were still too many defensive breakdowns. Grant is sort of a cherry picker, but we never really adjusted to his movements.
-- Dumb fouls. How many times are we going to commit a soft foul in the act of shooting? Blair's second half fouls was a little rough but at least he prevented the score.

There are some really good things to build upon. The first Virginia game was where things started to fall apart. Maybe we can use the rematch as a chance to turn the season around.

Email ThisBlogThis!Share to TwitterShare to FacebookShare to Pinterest
Labels: basketball

Were Rece Davis and Jay Bilas even at Conte calling the game or did they do it remotely? I could swear I saw them on TV at the Indiana-Illinois game after. I don't think I've ever noticed them doing that before.

tyler roche even got some rebounds (maybe he read up on how pathetic his % is)! shamari hit a couple shots! blair got some offense!

tyrese is magic, but he needs help from the team -- less turnovers, less offensive fouls, less easy baskets for the other team

still, a lot to be happy about here. very exciting to have such talented freshman (paris, raji, sanders, southern). they all seem to be very tough and gamers

I'm probably just a blind optimist here, but the schedule opens up down the stretch. Besides Carolina, the rest of our remaining games are against teams that are a combined 16-32 in conference. It seems crazy after that losing streak, but I still see a very real possibility for this team to go .500 in conference and position itself to maybe make a little noise in the ACC tournament.