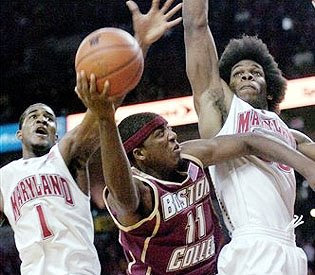 Corey Raji had one of the more interesting seasons on the team this year. The first few games of the season were unremarkable. Then he had a mini-hot streak that included ACC rookie of the week honors in December. His minutes declined with the start of conference play. However, he bounced back and worked his way into the starting line up by the end of the season. The stops and starts of his season embodied the challenges that the team and his fellow freshmen experienced this year.

The good news about Raji’s play down the stretch is that he performed a role we need: the stat filling wing player. He can rebound. He can get those garbage points that come out of Skinner's offense. He understands the flex and he’s a versatile defender. While he didn’t take over many games, Raji had the lowest turnover ratio on the team and the third highest rebounding ratio per minutes played (just slightly behind Spear and Oates). Contributions without drawbacks are what keep you on the floor with Skinner.

There is always room for improvement. While a good defender, he is far from a shutdown solution (see McClinton in the second Miami game). He, like some of his other freshmen, forced some awkward shots when the team was struggling. Teams will also continue to press BC until someone like Raji can start bailing out our point guards with smart passing and good ball handling.

And then there are the free throws. Raji shot an abysmal .556 from the line. That was lower than his actual shooting percentage of .608! With his style of play, Raji will be going to the line often. We can’t sacrifice all those points. His form isn’t bad, so I assume it is just mental and something he can improve.

I’ve written that Raji might not have the same upside as Sanders or Southern, but as his first season showed, he can be a very, very good player at BC.

"forced some akward shots when the team was struggling."

Corey will improve every year - exactly what we need.

Raji was really encouraging down the stretch this season. I never realized how bad his FT shooting was (I never check the stats on the jumbotron), I agree he needs a lot of work there.

I think that his shooting in general could use some help... I know he had a good precentage, but that was from mostly layups. It would be nice if he could develop a jumper of some sort. That would open up a lot of things for him and the rest of the offense. His form is not ugly, but the result often is.