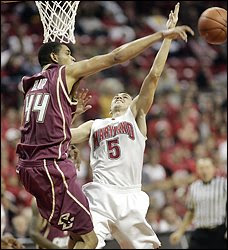 In a season of letdowns, one of the bigger disappointments had to be the play of Tyrelle Blair. The knowns before the season: Blair's shot blocking. The unknowns: could he become a great defender and offensive contributor? Despite being named to the All ACC defensive team and leading the conference in blocks, Blair did not take his D to the next level. And his O never became consistent.

Blair does deserve some credit. His shot blocking did alter a few games in BC's favor. His 11 blocks against Maryland will go down as one of the best single-game defensive performances in BC history. As for scoring, Blair was solid from the line and did a decent job finishing open looks.

Blair never became the rebounder we needed. As Raji and to a lesser extent Spears showed, putbacks are common place in our style of play. Yet Blair rarely got in the mix. And when he did go up, he lacked the touch and strength to finish well against big bodies. Blair also made some troubling errors when tyring to be a post player. Too often the ball would go into him with his back to the basket and he'd force a bad pass or bad shot.

I also think the losing affected Blair. He lost his cool against Robert Morris and then seemed to check out during the late season skid.

I thank Blair for his time and contribution to BC. His play at the end of last season, including his game winner at Florida State, will always be remembered. At times, he changed games with his swats. Even if his senior year fell short of expectations he had his moments. Best of luck to him in his post BC career.

well said.... the kid just seems to be uncomfortable.... with the ball when he receives it on the elbow, socially...

he gave us a center when we needed one, and things probably would have been worse without him.

great example of a player who is very effective off the bench but doesn't translate as a starter.