Muse, Gerbe lead BC to another Hockey East title 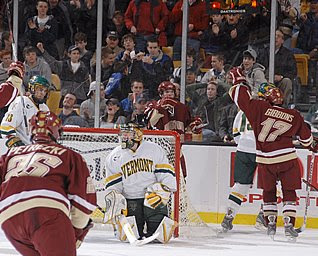 John Muse prevented any BC hangovers from Friday's triple overtime marathon by shutting down UVM in the first period. His fellow Eagles matched his strong strong play (an eventual shutout) in the second period and then held on for a 4-0 win. It is BC's third Hockey East title in the last four years. Congrats to Jerry York on another trophy and for getting the team to peak at just the right time.

BC has now won the Beanpot and the Hockey East titles. They last time that happened was 2001. Not to jinx us, but in 2001 we also added a pretty big third trophy before the year was over.
Posted by ATL_eagle at 3/22/2008

Email ThisBlogThis!Share to TwitterShare to FacebookShare to Pinterest
Labels: Gerbe for Hobey, Hockey

Congrats all around: York's established the program as the model of consistency (highest winning percentage of the past 11 years...).

Can't wait for the REAL brackets (hockey) to come out...

Fantastic - we are very proud of our Mens Hockey Program.

I hope these players have some good fortune in the Nationals to go along with their hard work and top notch performances.

I too am looking forward to the brackets.

Locked up a 2 seed in the tourney...check out the bracketwhen you get a second.

You have to like playing in Worcester. We should be able to turn out a nice crowd.

There's something good about playing our best hockey in March. All of a sudden, Johnny Muse faced the fire and knows what he's doing. If only Bradford was healthy...