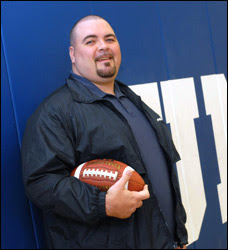 Since I am a skeptic and critic of the football recruiting rankings, I felt it was only fair to ask one of their own a few questions about the process and BC's place in it. Thankfully Scout.com's Bob Lichtenfels took the time to answer a few of my queries. Lichtenfels, a former high school coach, covers the Northeast for Scout. Below are my questions and Bob's answers.

1. Traditionally Rivals has given BC higher marks than Scout for overall class recruiting. This year was different as Scout had BC at 22 and Rivals ranked BC 33rd overall. Was there something about the makeup of this class that had it score higher in Scout's methodology than it has in the past?

Bob Lichtenfels: The short answer is that this Boston College class just had more talent than previous classes. We have hired more people in our regions and when you have more scout’s out in the field you get a chance to see more kids our rankings have also been effected by the fact that our star rankings have increased slightly over the past few years, so you now have a lot more kids being ranked than in previous years. We’re not in competition with our rankings against anyone; we don’t compare and contrast with what Rivals, ESPN or anyone else does. Honestly I would not have even known if you did not mention it to me.

2. BC will have a small signing class for 2009 (probably less than 18). How high can a class that small even move in the rankings?

BL: I think Ohio State and USC showed this year that a class can be small, but can still measure up with anyone in the nation. They both finished in the top ten and signed less than 20 players.

3. Now that Jags' staff has been in place for a full cycle, what sort of things are you hearing about their efforts? What sort of impression are they making on high school coaches and players?

BL: Boston College has been doing an outstanding job early on, especially in Virginia. Top kids like Logan Heastie and Tahj Boyd really like the straight forward approach by Jags’ and his staff.

4. What is the biggest misconception about football recruiting news/reporting/ranking?

BL: I think the biggest misconception is rankings. Parents and kids feel they won’t be recruited unless they are a four star on one of the recruiting sites. Coaches don’t recruit based on how many stars a kid has. They separate you into two basic groups offer or no offer. Stars are fun to talk about, but that is about it. I personally would rather evaluate a player and that is it, assigning stars is not something most of us cherish. The other biggest would be something you mentioned and that is how come the so-called name school always finishes higher. That’s pretty simply answered how many times do you see BC play for a national title? How many times do you see Ohio State, USC, Florida, LSU? I mean there is a reason why they win and there is a reason why their rosters are stacked full of elite prospects.

Most of us work in the business because we have a passion for it and we are good at it. Some people may have agenda’s or do it for the wrong reasons and we all get lumped together and that to me is the biggest misconception about what we do.

Read more of what Bob and his colleagues have to say at Scout.com
Posted by ATL_eagle at 3/12/2008

Someone should tell Bob it's not BC's fault we don't play for a national title, nine or tens wins is the most anyone can ever do at BC. Right, Tom?

Logan Heastie is ranked the # 1 WR in the nation according to Scout... really hope we get him

Cool interview, ATL. The more transparant that recruiting experts can make the process and ratings for people like me who lack knowledge about such things, the better. It builds excitement to learn about an upcoming year and what players will be getting playing time that were either backups, redshirted or true freshmen.

Certainly is encouraging to think that Jags actually might patch together some excellent teams while he's here.

On my way to get some Viagra Online I encountered your marvelous site!
As a fact of matter, I have always liked everything related to Atlanta since I went there once ago, in a nutshell, I loved that city.

Thanks a lot for sharing this wonderful issue.