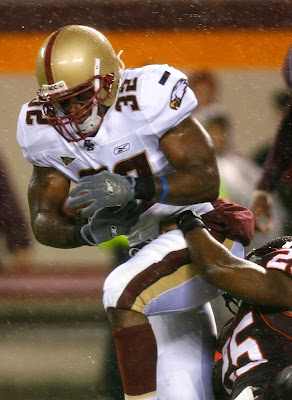 27 running backs were drafted this year. Andre Callender was not among them. This wasn't a surprise. Entering the Draft, Callender was a borderline draftee. Guys who accomplished much more and showed greater upside found themselves going late in the second day.

What has surprised me is that AC is not making any news in this free agency period. Many of his teammates have signed as free agents or at least been through a tryout or two. Yet no word on 'Dre. He had a decent Pro Day and a great senior year. That should have been enough to generate interest. Maybe something is brewing that I am not aware of. I haven't seen anything to report. I don't think the NFL is missing out on some superstar, but I do think he can be a contributor and is underrated in the passing game. Hopefully he'll get a shot somewhere.

UPDATE: Dre is getting a tryout with the Giants.

I believe Dre had a tryout with the pats - the pats don't release what free agents they bring in to try out...

Another BC blog, Couple Beer, No Beers is reporting that Callender will be trying out at the NY Football Giants' mini camp this weekend

best of luck to Dre

LA, I wasn't sure if anyone would pick up on that.

yeah i like it...i did a double take because when i was skimming the page i almost didnt believe i actually read it correctly...well played ATL