Flutie: much more than a statue 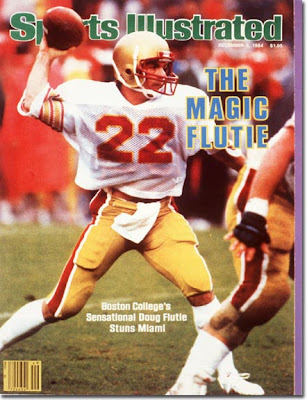 Friday the school honors Doug Flutie with a statue outside of Alumni. It's a nice tribute and he is certainly deserving. Part of me thinks it is not enough. Flutie will always be remembered for the Miami pass and the Heisman but time has not bee kind to his records or his influence on the game.

Flutie shattered dozens of passing records when he played. More wide open offenses and longer seasons have made some of his numbers pedestrian. They weren't. Flutie's output through the air was unmatched even by his contemporaries like Marino, Elway and Kelly.

We also take for granted dual threat QBs these days. There wasn't much of that in the early '80s. Running QBs would throw the ball less than 10 times a game, while pocket passers weren't nearly as agile as Doug.

To get a feel for what he did be sure to check out the video clip on bceagles.com. They have a 1984 piece from Dick Schaap that begins to put things in perspective.

There have been many great BC athletes before and since Flutie but I don't think we'll ever see someone change our school and his sport like Doug did.

Xman said...
This comment has been removed by the author.
4:40 PM

per BC:
"On Thursday, get to O'Neill Plaza at 6:00 PM for the Notre Dame Weekend Pep Rally. There will be appearances by both the Men's Hockey Team and the Football team, with the captains and coaches of both clubs giving some remarks. There will also be a few interactive skits with members of both teams, as well as a special commemorative T-Shirt for the first 1,500 lucky fans, and a special guest appearance by Doug Flutie."