Chip Kelly -- influencing BC football from 3,000 miles away 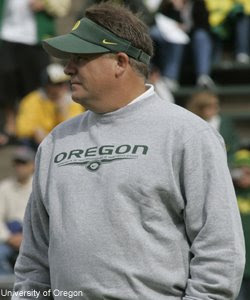 Outside of Lane Kiffin, no new coach is getting as much press as Oregon's Chip Kelly. Considered the latest college football offensive genius, Kelly is the next big thing. Lost among all the hoopla is that the only staff outside the Pac 10 with three of Kelly's former colleagues and proteges is Boston College. What does it mean when you have the pupils working under a different leader and coordinator. We will soon find out, but first let's look at the Kelly guys in Boston and what they bring to the table.

Ryan Day is the known commodity among BC fans. Just 30, he is considered the rising star. He reportedly turned down opportunities from Mississippi State, Florida, and the chance to join Jags in Tampa. Kelly even makes reference to Day joining him in Eugene if not for some timing and move issues. While at BC Day has been a very good position coach and a hard working recruiter. While nothing has ever been formally announced, it is rumored that he'll be the next offensive coordinator when Tranquill retires (for the third time).

Day gets all the pub, but Sean Devine has the resume closest to Kelly's. In fact, he took over the play calling duties at UNH when Kelly left for Oregon. While he never reached the offensive heights Kelly did in 2005, UNH was 17-8 in Devine's two seasons as OC and scored as often as most of Kelly's Wildcat offenses. Devine won't be calling plays, but he will be using the same blocking scheme as the Ducks. This is important as it provides continuity to Jack Bicknell Jr.'s (yet another former UNH assistant) teachings. Having spent the most time actually working with Kelly, you hope that Devine will share the same drive to learn about other offenses and relentlessly recruit. The BC OLine coaching job has been a great springboard in the past. Combine that with everyone looking for the next Chip Kelly and you have to consider this a great platform for Devine's career. If his veteran line plays well, he'll join Day as a hot coaching name.

The final branch of the Kelly tree in Boston is Mike Dawson. Dawson spent most of his time at UNH on the defensive side of the ball, so he had the fortune (or misfortune) of going against Kelly every day in practice. Those experiments, gadgets and new looks -- Mike Dawson saw them first. The UNH defenses were never dominant, but that might not be relevant for Dawson's new role as special teams coordinator. You'd hope Kelly's experimentation bug bit him and he brings fresh ideas and good excecution to a BC unit that he struggled under the past two staffs.

What does it all mean? BC has disciples of the hottest name in college football working under one of the most experienced Head Coach-Offensive Coordinator combos in DIA. These guys may all share Kelly's ambition and perspective, but a big reason for Kelly's success was the encouragement and freedom he received from Sean McDonnell and later Mike Bellotti. Will Spaz and Tranq do the same for their young turks? Ideally these guys will have the freedom and BC will succeed and eventually have a transition like Oregon's. How Spaz mentors and works with the UNH clique will probably be the biggest factor in the success of failure of his first two seasons. Let's hope he gives Bellotti a call.

nothing i have read as made me feel better about the upcoming season. thank you Bill for some perspective.

atl, you spoil us. thank you again for the blog and the perspective.

Interesting post. I've never really been a fan of Oregon's "pistol" sets. It looks like a miniature version of a shotgun formation. Not sure what the purpose is, but you can't dispute his success

Bill-This was fun to read--you know your stuff and get into it and this "news" just pumped me up for this year's football season at BC. Thanks for the pov.

this blog may just be the best thing about BC sports. thanks for the info ATL, my take on the coaching changes just got a whole lot brighter.