An evening with Matt and Gene

Tonight the BC Club of Atlanta hosted a cocktail party with Matt Ryan and Gene DeFilippo. Thanks to the Alumni office for coordinating the details and our local chapter president Kyla Perfetuo. Big congrats to BC Mike for being the driving force behind the event and for giving Gene a very nice introduction.

Before I get into the details of the evening, I strongly encourage all chapters to organize and push for events like these. We are very fortunate that the ACC Championship is taking place here in our city and that Matt just happened to be drafted by the Falcons, but there are always opportunities like this in major cities. Try to capitalize on any occasion locally and then work with BC to bring some names to your town. I don't know if Spaz expressed any willingness to do these sorts of things, but his recruiting will take him to the big markets of the Midwest, Texas and California. It doesn't hurt to see if he and/or Gene will come and speak with you. And as BC continues to push the "Light of the World" campaign they will need to hold more events like this. So be aggressive, organized and continue to give to BC. Pep talk over.

As for the evening, it was a simple cocktail party for the first hour. Matt and Gene both worked the room while alumni mingled. Then we moved into a seated area. The alumni office showed a short Light the World video, then BC Mike introduced Gene. Gene spoke for a few minutes and then handed things over to Matt. Matt was the star of the show. Gene does this sort of thing for a living. Matt does it even better. Working off the cuff, he gave a short speech with the right amount of humor, modesty, and poise. He understood his audience and what they wanted to hear. I don't want to make it sound like the Gettysburg Address, but I've sat through a lot of canned speeches. And to see Matt handle himself in this way was very impressive. If he didn't have an NFL arm, you could see that he'd be very comfortable in front of a classroom, court room or board room.

After the speeches Matt and Gene both stood for a short Q&A. This was probably the best part of the evening. Like and old comedy team they finished each others sentences and balanced things out. Gene did an impression of Jared Dudley. They told a story together about Matt going to Gene and asking that the football team live somewhere other than Upper during the summer practices. Matt fielded most of the questions. He talked about the difference between college and pros. Admitted that the Virginia Tech touchdown is still his favorite moment and told stories about the NFL. I couldn't help myself and asked a question to Gene. I didn't want to rehash any of the topics where we already knew his answer or try to show him up with any of the things I've criticized him for on the blog, so I hit on the subject that I get emailed about often: ESPN U. I said I get ESPN U but many BC fans don't and I wanted to know what the ACC is doing about it. Gene got into the history of ESPN and how they've always leveraged special events and live games to force the cable companies to carry them. First with the original ESPN and then with ESPN 2. He even said that that the 1995 Duke-UNC game was a critical piece of programing in getting ESPN 2 onto more systems. He then explained that some of the top ESPN folks just met with the ACC about this issue. They are going to continue to push and also hope fan interest puts pressure on the cable companies. In summary, there was no timeline or specifics given, but the powers that be do think getting ESPN U into more homes is important.

After the Q&A wrapped, people mingled and Matt stood patiently for more pictures and autographs. The guy is a saint. He was kissing babies, shaking hands, listening to everyone's stories and fawning questions...and he's and NFL superstar. How many of us would be that patient with nothing to gain?

It was a short, fun night and certainly made me proud to be a BC fan. Despite my differences with how Gene handled the Jags situation, I thank him for speaking to the BC fans tonight. Obvious thanks to Matt. And one more thanks to Kyla and Mike for pulling it off.

[Here are my amateur pictures. Sorry, but the lighting was screwing up my auto focus.] 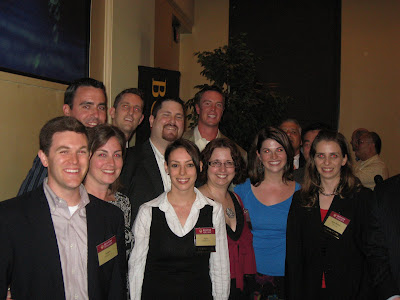 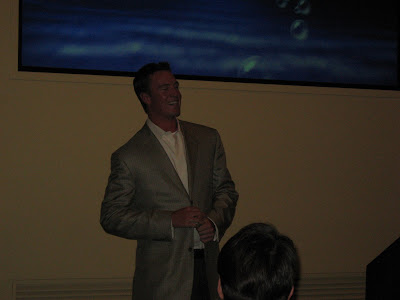 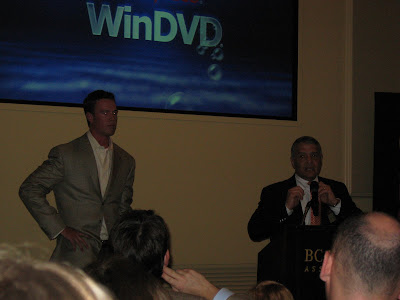 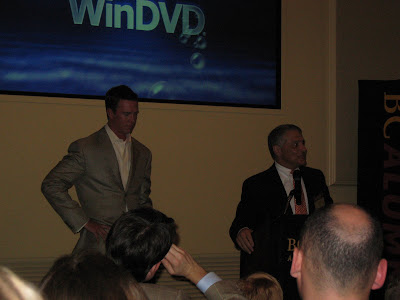 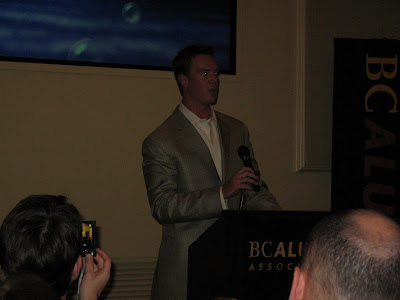 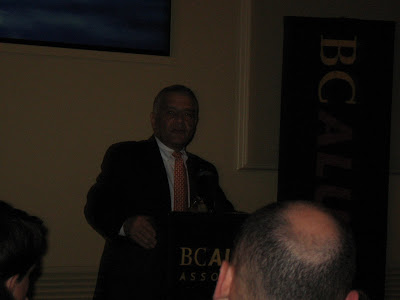 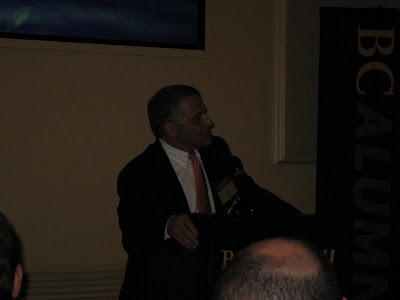 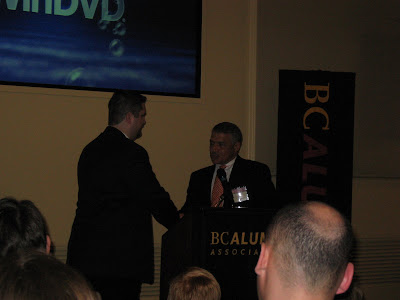 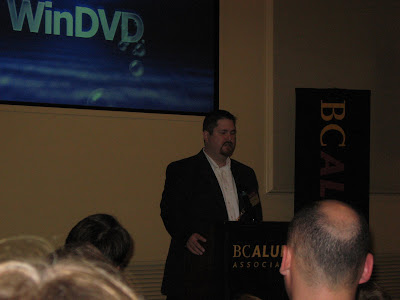 Email ThisBlogThis!Share to TwitterShare to FacebookShare to Pinterest
Labels: BC Club of Atlanta, bc fund, BC Mike, Gene D, Matt Ryan, Matt Ryan is a Falcon

It messed my pictures up as well.. but agreed, great event..
Nice to see you..

Thanks again for the kind words, Bill.

It was nice to see a chapter event we had worked so long and hard for to come off pretty well.

I unfortunately wasn't able to ask any "real" questions. I had intended to ask the often mentioned LAX question and marketing question (which someone sort of asked), but I guess you realize after you give a guy a really positive introduction, you can't really be the same guy asking semi-accusatory questions, know what I mean?

Mucho props to the whole chapter for making last night work, but especially our local alums and fans who came out for the event. If you guys hadn't shown up in such force, a future event would have been possible. We have put in a request for Spaz, FWIW...last night's event can't hurt our chances for that now!

I was there as well last night and it was fantastic. Gene made a point of acknowledging my boy's birthday and the whole room sang "Happy Birthday." Now he's telling all his schoolmates that "Matt Ryan sang Happy Birthday to me!"

A great memory for my boys and one more reason I'm proud to be a BC alum. Thanks to BC Mike and everyone else who put this together. And Gene did promise me that we will see "real" jerseys in the bookstore soon (one of my pet peaves)

Please dont tease me with real jerseys. Was this a typical AD answer, or do you think this is legit?

And any chance you guys can put it a word, to allow us to personalize these jerseys. I know i'm asking for too much at once.

I love that even the fake jerseys will have the number of a semi-successfull player who left within the past 3 years. Like this year we'd see fake Chris Crane or Kevin Challenger.

I'm not a jersey wearer, but I hate seeing lame/fake ones, so I'm on board.

Now if only we could get the same maroon on things, so everyone's t-shirts, sweatshirts, hats, and polos weren't a rainbow in and of themselves. (or gold) (and please minimize the black or grey)

Reading about this has thoroughly convinced me to stage a coup de 'tat and try to do something better here in Miami. Its so sad to read about all the great stuff other chapters do, and then up having to go to NC State, Northeastern, and FSU Alumni Gamewatches to see us play...

Eagle1331-
Good for you. You're in an ACC town, so you should have a great excuse to have a big BC event any time a BC team comes to play Miami. Good luck.

Thanks for raising the ESPNU question, a great source of grief for amny of us.