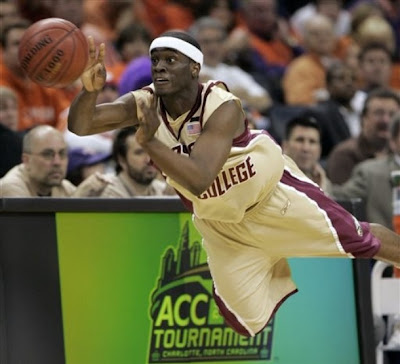 In football the most popular guy is the backup quarterback. In basketball the backup point guard doesn't usually generate much excitement or longing. Yet this year you'd hear plenty of people wanting to see more of Biko Paris. The thought was the team was better with him at 1 and Rice at the 2 spot. While we will never know if Paris would have made more of a difference, we do know that Paris was very productive in his role this year.

Even though he is the closest thing we had to a point guard, Paris wasn't just a distributor. In the final weeks and in the ACC tourney he proved he could make big outside shots. Paris is also careful with the ball. His assist to turnover ratio was the best on the team.

While I think he'll play well in his expanded role next season, Paris still has room for improvement. He struggles a bit in the press. He doesn't take risks defensively but isn't particularly strong or able to just down top guards. We have no idea if he will sustain the same level of productivity if he starts logging 30+ minutes.

This is a glowing review for a guy who was only seventh in minutes played. He wasn't a game changer, but his steady hand and solid production was just what this team needed and will be a good foundation for next season.

I like biko paris, and think he's a decent guard. I think a B is very generous if he is compared to other players. If he is graded on realizing potential i think this grade is right on mark.

I really think we'll be able to point out some of his weaknesses as he starts logging more minutes. He's short so we'll see how he matches up against longer guards for an extended period of time.

I still look for him to run the flex fairly well, which is great for skinner but might not be good for our team. Think about how many ill advised made 3's bailed us out of a poor offense. GULP. Looking for some players to really mature over the summer. overseas trips always bring a team together

I agree with raj that Paris is getting better. His minutes are going to be up these next couple of seasons and hopefully he'll be able to produce.

We mainly supply Jordan,Nike and other brand shoes,

GUCCI,PRADA,LV,FENDI and other luxury brands of handbags,