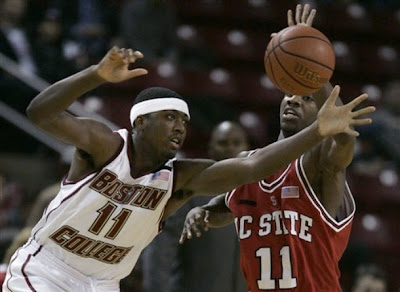 I didn't know what to factor into Corey Raji's grade. He showed guts and toughness by playing with a bad groin for the heart of the schedule. Yet he clearly frustrated fans and didn't progress as much as I would have hoped. At the end of the day it comes back to expectations and Raji didn't meet them.

The good news about Raji is that what he did well, he did very well. He's an instinctive rebounder who led the team in offensive [Corrected. Thanks, conlonc] boards. Having a guy who can keep those possessions alive is the key to Skinner's offensive system. Raji was good on the glass last year and only got better this year. In addition to being in the right place at the right time, he's also shown he can grab a ball in traffic and fight for those tough rebounds. Raji excelled in transition. He runs the floor well and is a good finisher on the break.

Raji's weaknesses were pretty evident -- he had 0 touch around the basket. He failed to convert on numerous opportunities close to the hoop. I have no idea what happened. Last year he had a very good shooting percentage by filling the stat sheet with putbacks and bunnies. Now it is like he is trying to get a ball through one of those small hoops you'd see at a carnival. Raji also struggled at times defensively. Big men got some easy baskets on him. Last year we often gave him a tough defensive assignment on wing players. This year other eagles got the call.

Raji has a great career ahead of him. Anyone who can rebound like that has huge value to any team. Maybe with the expectations a little lower next year, he'll step up his game.

Sounds like you think Raji should be the #6 guy next year, and move Biko & Reggie into the starting lineup.

It's all a fair assessment, but I'd give him a slightly higher grade for filling some team weaknesses related to size. We ask him to play bigger than his height, and for the most part he gives us that. Corey would have a different role on a different team.

I also thought he got on some hot runs and carried BC for chunks of time in some key games. And he's probably our best rebounder, so it's tough to dismiss the amount of his contribution.

I think Corey should be the first guy off the bench. Who else is it going to be? Dunn? We have a good history of bringing in an energetic contributor, who is good enough to start, off the bench - Beerbohm, Sidney, Ty, Reggie...

I think the starting 5 should be Biko, Reggie, Sanders, Trap, and Southern.

i have always thought that raji would be a better 6th man, but the problem is our shortage up front.

It would also be nice to see Rakim show a little more effort in crashing the boards in order for us to have the luxury of raji coming off the bench.

That being said, Raji wasn't heavily recruited coming out of high school, he plays bigger than he is, and hustles. HE exceeded my expectations for sure. I'd take that minus away and give him a B. At the end of the day he isnt the most talented, but i like his effort and without him we lose a lot of our second chance opportunities. He basically plays out of position and does a fairly decent job. I'm in the Raji fan club.

yeah it's tough finding the right grade to give here. the groin injury was too bad, lil reminiscent of ellis hobbs last year. gotta give him credit for fighting through that, as he was clearly in pain for the majority(?) of the season

the rebounding is huge though. offensive rebounds can have a big impact on a game and help with getting a mental edge.

i remember corey sitting on the bench late in many games. this could have been because of the injury, not sure.

i'm excited for next season tho!

Seems that not every donor is psyched about Gene D's extension:

Barber originally came out loudly against O'Brien leaving, so his apparent conflict with Gene goes back awhile. Interesting nonetheless.

Good point, Patrick. That's a statement for sure.

The guy wanted TOB to stay. What more do you need to know about his stance on BC athletics?

I think the criticism of Raji's shooting percentage is unfair. He shot 51.7% on twos for the year and had an offensive rating of 119.0, those are both strong numbers. Raji was efficient and productive when he used possessions, which admittedly was not as frequently as Rice, Sanders or Trapani. Raji shooting percentage was lower this year than his freshman year, but his freshman % was so high it was probably unsustainable. Raji was a major contributor to this year's success and I think his grade should be higher to reflect that.

TOB is gone, long gone...It's nuts to treat the man's departure like he was our Vince Lombardi, especially after all this time--like 2 great seasons w/o his mystical inscrutableness. It's not like TOB is going to soon coach the Giants and win the Super Bowl someday.(Though he could end up at ND someday because they did consider him...n'est-ce pas?) Are we assuming Barber is delusional? I hope not--because maybe he just decided he just doesn't like Gene for other reasons and he's outta here(BC). The economy is probably a good piece of all this. Can we just let TOB go, please? Spaz will be great and all these disgruntled old fahts will have to deal with that on their own time--what's left of it. Movin' on is a good thing here...let's do it.