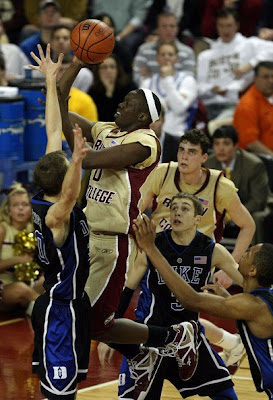 If you look at Reggie Jackson's stat line for the year, you wouldn't come away thinking he was a difference maker. Yet he was vital and did everything well without his weaknesses being exploited.

Any discussion of Jackson has to center on the Duke and North Carolina games. In both he stepped up and was unafraid to have the ball in his hands late in the game. That poise -- against college basketball heavyweights -- is an encouraging sign of things to come.

I also think Jackson's energy and defense were critical. The wiry guard mixed it up close to the basket for 14 blocked shots. Jackson also pushed the tempo off of turnovers. In a program that requires a lot of self motivation, Jackson provided a much needed spark.

If you are going to fault him for anything, it was his outside shooting and occasionally getting lost on defensive switches. But as I mentioned earlier, even those problems never cost us a game.

Jackson outperformed expectations and looks to be a key for the next three years. Next season he'll have to step up his game to fill some of the void left by Rice, but grading him on what he did this year, I give him high marks.

A few too many times he turned the ball over trying to dribble behind his back, otherwise a really nice freshman season from Jackson. He should be us some smiles the next 3 years.

As a freshman, he exuded a tremendous amount of confidence on the big stage. He reminds me of Troy Bell except Troy shot it better and he plays better defense. I'm just hopeful for the future of BC Basketball. Also the athleticism was fun to watch. I'm anxious to see his abilities full time.

Basket ball is a great game that is played at international level as well. Now a days as with the men women are also getting the best it resume writing services of this game with great interest. They are also laying at national to international level for the sake of their country and its progress and fame as well.