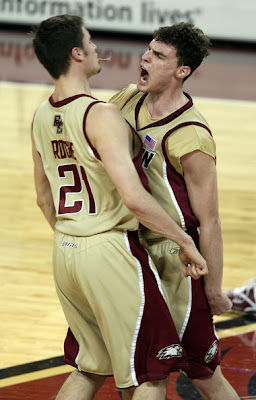 In an earlier Basketball Grades post, I referenced the rebirth of Tyler Roche. A few folks scoffed. I think I was on the mark. How else would you describe a guy who was ignored for the first few weeks by the coaching staff, written off by most BC fans and then became a solid contributor?

With the youth movement and Trapani's transfer complete, Roche was sitting on the end of the bench early in the season. As he would later tell the media, the former starter felt frustrated. He knew he could contribute. But I am sure the staff had many of the same old fears regarding Roche: can't make the shots in game and is limited defensively.

Eventually he got on the floor and stepped up. He started knocking down his 3s. He didn't shut anyone down, but became a serviceable and fundamentally sound defender. Although not as tall or as versatile as Trapani, Roche served as a good sub when Trapani needed a rest.

Now just because he improved doesn't mean he doesn't have flaws. He made some curious decisions inbounding and doesn't have a great handle.

Roche will never be an all conference player. But the grade is in part based on expectations. He exceeded them this season.

Agreed, he made strides this year. He gave us a body down low on defense, made some shots... all stuff you mention. Maybe he didn't go nuts statistically, but you could see the difference between previous years. I mean, we all saw his frosh & soph seasons, it was a clear disappointment. Its like now he's finally adjusting to D1/ACC, which was a huge adjustment from New Hampshire Public Schools.

We don't need him to be a force, we have other guys for that, but if he can fill a role, that makes him valuable to us.

He also managed to Spit directly into Trapani's mouth in that photo...which indicates better aim than he has had on most of his three point attempts throughout his career

lets not get carried away with ourselves. He hit 21 three's this year...

And when 3-point shooting is literally the only threat you pose, that’s just doesn't cut it in most D1 programs (let alone ACC).

Roche offered NOTHING other than an occasion 3-pointer offensively, was invisible on the boards and a poor defender- and this is where I strongly disagree with your assertion that he "became a serviceable and fundamentally sound defender."

I have no idea what the staff see's in him and was completely baffled by the amount of time he spent defending power forwards that were out of his league (see Raymond Sykes in the second half of the Clemson game). I don’t fault him for being played out of position but I don't see how he can be considered a good sub for Trapani as he can't rebound or play post-D. He's a liability against power forwards who easily posted him up and small forwards who were too quick for him.

In my opinion he should not see the floor against athletic teams i.e.- most of the ACC and is even hindering the development of big men such as Ravenel and to a lesser extent Dunn.

I hate being so negative but I really think Roche is emblematic of a lot of most of the problems this team has and should be used in a vastly different role.

He shot 35.6% from 3pt range. I understand this is based on expectations but this guy is a Patriot League player and probably wouldn't sniff All Conference status there either.

Would have to agree with the last three posts, including the spit post. I understand it's Massachusetts fellas, but come on...

As for Roche's evaluation, if the standard is what we can expect based on his talent relative to the rest of the conference, then a "C" is the highest we should go. If the standard is higher, i.e. what to expect of a D1 bball player in one of the top two conferences in the country who gets decent minutes, then I think a "C-" is the best I could do.

I'm sure the guy gives it his all. That's all you can ask. But when you can't create your own shot, you better be a good defender and, with his height, a good rebounder. I don't see those attributes shine as much as his occasional 3 pointer. Not trying to be down on the kid, but the camera doesn't lie.

Hey, he's getting a free education and a lifetime of memories. Not bad.

Roche played 24 minutes and scored 8 points when we beat duke.

we also beat north carolina this season. he only played 8 minutes, but he's still a part of this team and does deserve some credit.

you also need to take into consideration that he was the 2nd most senior player on this team, and has certainly helped guide the freshman and sophomores

still, Tyler, if you're out there, we expect more outta you next year!

LMAO. A "B?" Hilarious. That clown is horrendously pathetic.

roche does not get it done on the boards. he doesnt play good d. he doesnt have a great handle. he is a '3 point specialist' but doesnt shoot the ball well-- even when he has wide open looks. he cannot create his own shot which in al's system is pretty important. he gives up a ton of 3 point plays (so does southern). i dont understand how roche plays as much as he does. i believe wf and ncsu were pursuing roche out of high school. i think they are probably glad he committed to bc. too passive. i dont get it.

Normally I think this blog is on the mark, but this one left me scratching my head. He's totally unathletic, has no upper body strength, extremely slow, never moves his feet on defense, is always out of position, doesn't box out, and can't create his own shot. He's too slow to be an effective perimeter player and too weak to play down low. Yeah, I guess he hits the occasional open shot, but that's not worthy of a B.

The Z Code software is live...and after doing a few bets myself and
pocketing the cash, I can tell you that this is REAL!

Grab your copy risk free quickly before they run out... everyone is
crazy about it and the race is on!

even if you are skeptical you really NEED to check out how transparent
these guys truly are...
Videos of bank accounts stuffed with money, videos of bookmaker
accounts, screenshots proving how effective this killer software is,
videos of how to make the money risk free, hundreds of real people
testimonials...

...proof, proof, and more proof!! All sitting there for you to
absorb! Don't take my word for it - you have to see it to believe it.

Heads up, though - I just got word from the developers that, due to
all of the traffic they're getting, their servers are working at peak
performance to keep the website up and running...

Thankfully they have 2 more that the software runs on .. and plenty of
backup ones.. but the website is under heavy hits, so they might close
the doors anytime..

Hope you make it in time!

P.S. There's a free tool, called Sports Predictions, that you can get
simply by visiting the site...
They're giving it out as a gift so head over there quickly :)