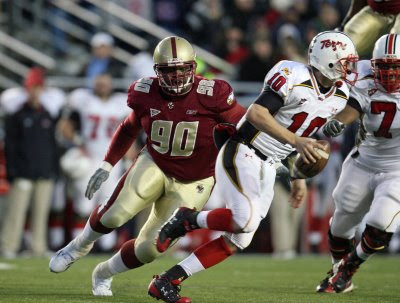 Every Draft Guru and ESPN talking head owes BJ Raji a big thank you. His stupid mistake just provided a second act to his draft story and fodder for the endless on-air debates that surround the NFL Draft. He's gone from this year's Mamula to this year's Warren Sapp.

After the season ended Raji was considered a late first rounder. Then he dominated the Senior Bowl practices. Buzz built. Then they actually played the Senior Bowl and looked even better. The media and NFL started taking notice. Raji followed this performance with a very good combine and Pro Day. Detroit even floated taking him first overall. This skyrocketing reminded many BC fans of Mamula's assent.

Now word leaked that he failed a drug test prior to his combine. This will only remind people of BJ's past issues. Do you spend a first round pick on a guy who hasn't shown consistent effort? Do you give millions to a guy who battles his weight? Do you build your defense around a guy who had problems in the classroom? Do you want to deal with the headache of having your new star deal with the drug question in every interview for the next 12 months? Do you want to take a guy who was too dumb, or oblivious, or undisciplined to avoid pot for a few weeks prior to a scheduled drug test? All these types of questions surrounded Warren Sapp in 1995 (ironically the same draft as Mamula).

In the end I think Raji will have a draft day similar to Sapp's. He'll slide a little further than he would have prior to the leak. He'll be embarrassed and over analyzed. And he will be a steal for whatever team gets him. He'll make good money but not as much as he would have a month ago. If he becomes a good pro no one will care. If he is a bust, everyone will say "I told you so."

Some regulars may wonder why I chose to focus on the media angle instead of BJ's boneheadedness. Partially because I don't think it will matter and partially because I am resigned to guys doing stupid things. They're human and just because you are a good football player doesn't mean you are a good decision maker. BJ's did a stupid thing and nothing I say can change that or bring a fresh take. My only hope is he changes his behavior and learns. But given his track record I think he'll remain talented and reckless.

I agree that it won't matter, he'll still be Top 20. Much more heinous offenses have been overlooked in the past.

Mariah Kinnley said...
This comment has been removed by a blog administrator.
11:28 PM

Corey, learn from your big bro and keep your nose clean the next two years.

i think to call him reckless is a little much.

Haha, I went to BC with this guy and had several classes with him (one of my majors was communications, aka football major at BC). He's certifiably retarded.

It's sad but I have to concur with the previous comment... There's a reason DL's are referred to as geraniums

ATL, Gene did a night at Rich Canning's house in Fairfield County CT.

Most interesting tidbit was that if Notre Dame does not renew us in 2013-2014 then we have in place plans to do a home and home series with TEXAS.

Notice the upper right corner of that photo. Evidently our D flies to the ball... literally.

Texas. Now that's more like it. Don't think UT would have as much to gain from that as we would, but I hope that rumor is true. I'd be very happy with that.

As for BJ...well, he would have to be able to pass the drug tests the NFL administers to avoid disciplinary action once in the league. Did he abstain at BC? I doubt it. How did that work?

Or, he could buy a Whizzinator from Onterrio Smith and carry it around with him wherever he goes on the chance that he'll be randomly drug tested.

Need I remind you that "The Original Whizzinator," includes a fake penis, bladder and athletic supporter.

You can now thank me for that visual. If he wanted to impress any future Mrs. Raji, he could get the "Extra-Large Original Whizzinator."

At this point, BJ is in it for BJ, not for BC. There's nothing a prospective NFL team doesn't know about their future potential 1st round pick.

Percy Harvin just failed for the same reason, too. But you can't teach speed.

Not sure how appropriate it is to have a commenter suggesting that a BC student-athlete is "retarded" on the blog.

Raji's actions clearly were lacking in common sense, given that his drug use will cost him millions. But let's hold off on ripping the guy -- I think we all happen to know quite a few graduates of Boston College who enjoyed smoking in college and have since made quite a life for themselves.

No PC sugar-coating on this one. Regardless of what cifuetj says that Raji did or said in the classroom, this single offense, if it turns out to be true, officially makes him retarded. He couldn't lay off the reefer for a month? He may have just cost himself and his family millions. Words like "stupid" and "dumb" don't do justice to that type of behavior. Not even close.

You know, some times things in life are simple. This is one of those times. It is INcorrect to call someone a retard. Politics has nothing to do with it.

I think it's a safe bet that if a man can't postpone his illegal habit for a couple of months for the sake of millions, then he's just plain stupid.

It may or may not matter.

Let's wait and see where he winds up...he may not fall all that far.

drug tests are bullshit. you can be around weed smoke, not smoke any, effectively get hot boxed, and you would still test positive. there are also false positives.