The sky is not falling 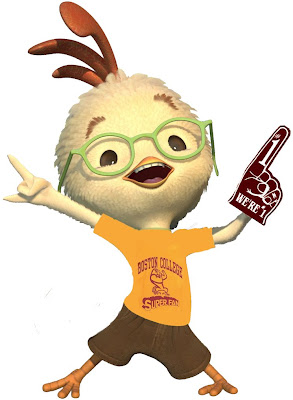 Chicken Little is not worried. Why are you?

I don’t need to rehash what has happened to our football program since the eve of the ACC Championship Game. Now I sense the fans have split into two groups. One that thinks we are headed into a long dark period that will have us longing for the bowl streak days. The other thinks we will struggle in the near term yet bounce back quickly. The opinion everyone seems to share is that this season is a lost cause. I have to disagree. Despite all the things we’ve been through, I still have hope for this year.

I was excited to see that our new coach is an optimist too. Let me state right now, there is no reason to write off this season. Even without Herzy and McLaughlin, the defense should be good. Look at Spaz’s record of consistency with much lessor talent. This defensive unit is not as talented as last year's, but it is much better than some of the Ds from earlier in the decade. We have more speed and big play ability in the defensive backfield than we’ve ever had. The Defensive Line will miss Raji and Brace but should see an upgrade from the Ends with the return of Albright and the maturity of some of the younger players. Now Spaz as Head Coach and McGovern as DC is not a tested combo. But neither has given us any inclination that there will be wholesales changes in style, scheme or play calling.

Offense is more unknown. But I will say again, losing Davis is not a major loss. He had his moments, but nothing to give you any more confidence than you should have now in Boek or Tuggle. QB is important. Very important. But not everything. BC was still a .500 program with the maddening play of Quinton Porter. Our QB with the best winning percentage in the program history was a 5’10 JUCO transfer. For all his moxie and smarts, Matt Hasselbeck had a losing record while at BC. Football is the ultimate team sport and you can work with and around a limited QB. Two guys who were well aware of our QB situation (Bicknell Jr. and Logan) wanted this job. If they had confidence they could win, why are we giving Spaz an excuse? There is plenty of talent in the backfield, the offensive line and among the WRs. Give us a true game manager and we can be competitive.

We have yet to play a down and people are already assigning blame to TOB and Jags. That’s wrong and sounds like ND fans blaming Willingham for Weis’ struggles or TOB blaming the gambling scandal five seasons later. Spaz doesn’t need our pity. He needs our belief and support and to be held to a high standard. I am glad he views this as an opportunity. It fits well with the “Ever to Excel.”

This is the first I heard that James McCluskey also had an achilles injury - is that accurate reporting by the Herald?

I think there are two ways a team can do when facing an extreme amount of adversity. They either pack it in, or band together and overacheive. My guess is that because of the kind of guys that we recruit, they will do the later. Whether that translates into wins is something that remains to be seen.

i love it atl.

Without looking over the schedule again, I say we go 7-5 or 6-6 this season. That's a relatively bad year by our standards this decade, but it also tells you how great a run we've had.

Moreover, I agree that this is not the start of some dark period for BC football. We may take a small hit this year, but we've got the makings of a quality recruiting class already forming and I am quite confident we'll be in great shape in the long term.

can you do a write up on how we would look as an option/wildcat team. using Boek as the option qb and with ninja, haden, and smith cycling as RBs i think this would work well until the coming of the Boisture era(which cant come soon enough.)

I don't necessarily believe that this will be the beginning of a "dark" period, but come on.

We were all told, and many believed, that all we needed last year was a "game manager" at QB. Losing Crane and Davis aren't big losses, but playing with inexperience at this position is almost always a re-introduction to the finer points of frustration (as last year taught us).

Who knows? Maybe I'll be surprised. But watching enough football has taught me that, without an elite recruiting class, we'll almost certainly take a step back before we threaten anyone at the top again.

And let's not put all our eggs in the Boisture basket. Nobody knows if his skills will translate. You expect him to step in his first year and contribute? Doubtful.

Adversity usually affects those who don't have top athletes the most. Better football programs can compensate by plugging in another 4or 5-star with speed.

I'm not being down for the sake of being down. I just don't think the next couple of years will satisfy those growing accustomed to ACCCG appearances. I hope I'm wrong.

CT has some good points, as usual. However I for one feel that we will be better offesnsively than we were after Crane went down. The win at Wake Forest was absolutely willed by the rest of the team. I guess Davis was pretty good in the Maryland game - but we had no chance in the ACCCG and the performance in Nashville was pretty embarrassing.

We have some top notch players if our QBs can get them the ball.

I'm interested to see how we stack up on defense at LB especially. If we take a step backwards, it will be due to the time it takes the other players to step up at LB.

eagleboston provided an overview back in mid-May. Perhaps we will have to be very aggressive and take chances on defense - more so than ever in the Spaz era.

I think it's all going to come down to how good the O-line is in opening holes and moving the pile. If we can establish and maintain a strong ground game, we take pressure off the rookie QB, see more third-and-twos than third-and-sevens, and keep the ball for longer. If the O-line struggles, everything else feels the strain. Personally, I hated the zone blocking in front of delayed handoffs to a flat-footed RB last year. I'm hoping we're done with that.