The truth about the blitz

I am not trying to pick on the defense here. We lost this game because we were bad on both sides of the ball. I wanted to show this play though to address one of the myths floated that Spaz/McGovern don't blitz. We actually blitz a decent amount. We just don't design or execute it particularly well. Sure, part is personnel. If you are blitzing with Herzy and with a front four that has Raji and Brace, your blitzes look good. But the past few weeks our blitzes have been ineffective and that was just one of the reasons we lost today. Take a look at this example.


It makes sense to blitz here. It is a crucial down and a stop here keeps VT from scoring. Taylor is still not a natural passer. Let him (and VT) beat us in the air. We set up in our base. 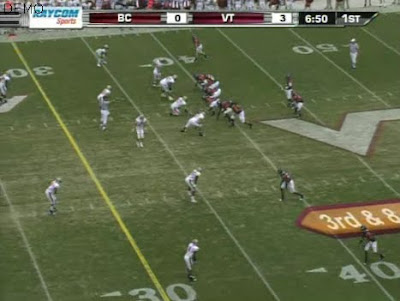 This is where the problem starts. LeGrande tips off his blitz well before the snap. Taylor is ready and so is the VT OLine and RB. 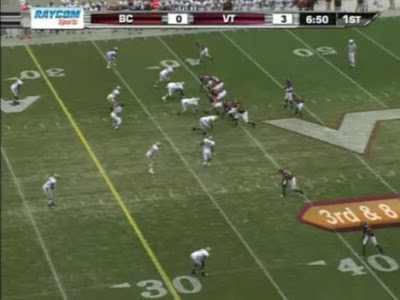 The element of surprise is gone. But we stay with the blitz. Why not? It is 3rd and long and LeGrande has been playing well. McLaughlin is now covering the slot receiver. Now this is why I say VT is good, but not that good. A good QB and well coached passing offense would see McLaughlin on the slot, make an adjustment and throw the quick out or slant and burn McLaughlin. VT didn't. 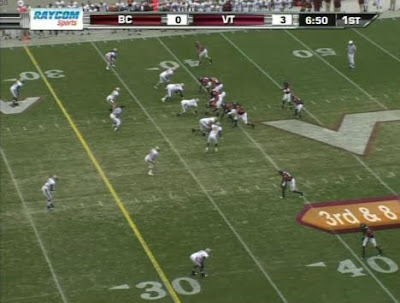 The ball is snapped and LeGrande does in fact blitz. However, he is swallowed by the tackle (but his containish play makes me wonder if he was not there to spy Taylor). Regardless there is no pressure on the VT QB...yet another anemic blitz. Taylor doesn't go to the slot. In fact the slot guy goes away from Taylor. But his movement draws McLaughlin. 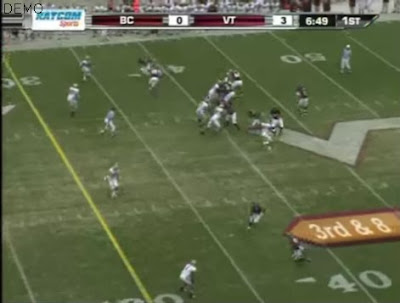 Now McLaughlin is out of position to cover the RB releasing from the backfield. I don't know if it is his man or if Kuechly should have moved over, but regardless, it is a blown assignment. The RB runs free and Taylor has an outlet. (Because it is a little blurry, the VT RB is the guy by the ref in the middle of the field.) 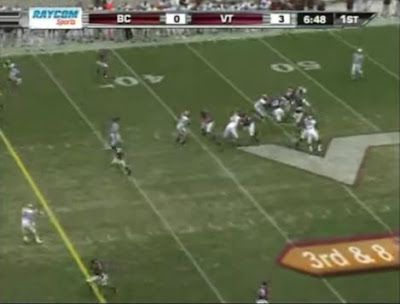 Easy catch. Easy first down. VT would go on to score and open the floodgates. 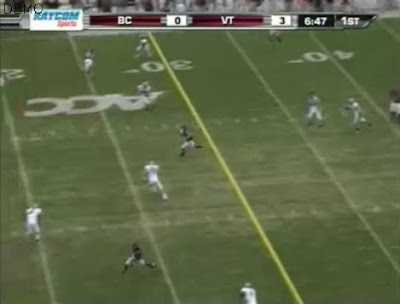 This play wasn't a disaster and certainly wasn't the biggest error of the day. But it illustrates some of the struggles of the defense the past few weeks. Poor design, poor execution and a blown assignment. Let's get it fixed soon.
Posted by ATL_eagle at 10/10/2009

are you watching this FSU GT game...just insane lack of defense!

ACC, crazy as usual. BC is a very young team and should get better week by week. I don't know that they can beat all 4 of the remaining ACC teams but the worst is behind us so BC has a shot. Unfortunately, they have no shot against Va Tech if they do go to the ACCCG. Too many horses at Va Tech and we just don't have a Matt Ryan caliber guy under center this season.

I highly doubt we beat ND given that it is on the road and we have a porous pass defense that Claussen is drooling over. Also, mark it down and don't say I didn't warn you - Central Michigan is going to be a very, very tough game for BC. Thankfully, it is at home.

quite gloomy eagle-iowa
but you have made you point so you can say "told you so" later. duly noted

eagleboston's points are valid, no? let's move beyond the 'polyanna-gloomy gus' thing and see what atl's review suggests.

thinking about c. michigan is a luxury at this point.

i will say, all the right teams are winning/losing in our division.

we still have the inside track to win the atlantic.... wow.... check it out

I don't see what is so gloomy about BC getting 7-8 wins this season given the fact they lost the 3 best players off of the defense and have zero QB's with experience. Mod34B seems to think if we are not touting BC for the national title that we are being gloomy. The BC team is what it is. They are not a great team and they are certainly not ACC Championship caliber. But, I do feel they can have a winning season and will be bowl eligible. How is that pessimistic?

you say:"Mod34B seems to think if we are not touting BC for the national title that we are being gloomy."

of course, as you know, i never said anything of the sort. Pretty lame argument, EagleIowa.


Seems like you are just try to stir the pot...

Not so sure it makes sense to blitz on 3rd and 8 there.