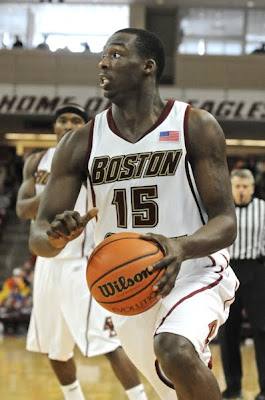 The highlight of last year's basketball season was the win over North Carolina at the Dean Dome. Yet it was all overshadowed as that night all hell broke loose between Gene and Jags. Unfortunately since then we've been bombarded with football drama since then and basketball hasn't been given its due. I am just as guilty. I never even finished my hoops grades. Now we are in November and the team opens their season with an exhibition against St. Michael's this weekend. So let's get to it and catch up with the basketball team...

What's new
Nothing really. It is the same staff and nearly the same team. Rice is gone but there are no new recruits or transfers. With other programs this might be a big deal. I actually think it is a bonus for BC. There is more than enough talent to go around and everyone is on the same page.

How will we replace Rice?
There is no one replacement for Rice. Most of his point duties will go to Biko Paris and Reggie Jackson, but those guys saw the floor last year. The beneficiary in minutes will probably be the big men like Ravenel and Dunn (assuming that Trapani and Raji get more time at the wings instead of the 4 spot this year).

As Paris has said, he'll be more of a distributor that Rice so I expect more efficiency on offense and probably more tight flex.

Rice does leave a gap though. He could be counted on to make big free throws down the stretch. No one on the current team has proven as consistent or clutch yet. Rice could also get his shot off against anyone. Sanders and Jackson showed that ability last year, but neither has done it as often as Rice and neither have his handle.

Who is going to step up?
Ravenenl was the subject of the positive summer whisper campaign. Hopefully he comes through. My bet though is Reggie Jackson. I think he can and will take his game to the next level.

With the six juniors it is harder to predict a break out season. Outside of some general maturity, what you see by the end of second year is often what you get. Of the six though, I think Sanders is most likely to make another leap and become an all conference type player. He was still so raw last year that I think better ball handling and more focus on defense can make him very dangerous.

When will we know about this team?
Skinner's team often leave you guessing. Just after the UNC win, we dropped a game to Harvard. The media picked us 9th in the ACC. I like most BC fans don't think things will be that bad. But we won't know for sure until Providence-Michigan-Miami stretch after Thanksgiving. Those three games will be good indicator if this is a team that will challenge for the top spot in the conference or sit on the bubble all season.

What is a concern?
Aside from the depth of the ACC, I am concerned about this team's defense. Individually none of the guys are great defenders and as a group they weren't very good last year. We didn't force many turnovers last year. That may change with Paris, but we don't know. We are also a bad defensive rebounding team. If we go big more often, that will hopefully improve.

Suggestion to help enjoy the season
If you like BC basketball but are not on twitter, I suggest you join so you can follow BC assistant Mo Cassara. Coach Cassara might be the biggest BC sports fan in the Athletic Department and I look forward to his updates on the team once play begins.

(Also, if you are going to join twitter you can follow me and whole bunch of other BC folks.)

What should the expectations be?
No one thinks we are a 9th place team. This team should be competitive and should be a tournament team again. If they land on the wrong side of the bubble, I at least expect a deep NIT run.

What is my prediction?
I think the team will start strong, hit some rough spots once they hit the meat of the ACC schedule. I think they finish well and make a run in the ACC tournament. That gets them off any bubble. I think they make the tourney as a 6ish seed, and make a nice run to the Sweet 16.

Regardless of how well it plays out, this should be a fun team to watch. Let's hope we get to watch them deep into March.

Thanks for the b-ball love. Call me crazy, but I'm really excited about this team. These guys beat UNC and Duke last year and I think the absence of Rice might actually help them avoid the dreaded let-down games. They will lean on eachother more and that will help. I agree with your picks for breakout years from Reggie and Rakim. Those guys are freak athletes and if they reach their potential, BC could be very good.

PS: As I type, FSU got a pick-six against Clemson ... Good news for BC.