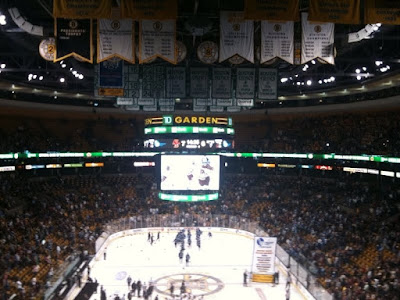 There are many components that go into Jerry York's success. No. 1 in my book would be his ability to have his team peaking at the end of the season. Tonight was just a culmination of BC's recent hot streak as BC beat Maine and won the Hockey East Tournament.

Since this is BC, the game had plenty of drama. When the Black Bears tied it with 30 seconds left, I thought we were doomed. But the guys played well and now add another trophy to Hockey's displays.

Thanks to Benjamin for the photo.

PS - the BC basketball team's loss to Northern Iowa is not looking so bad now is it?

My Dad will tell you that "Snooks" Kelley is the greatest college hockey coach of all time (and we did name the rink for him). Being a BC guy from that era I would never begrudge the old man that opinion, but I think that even he might consider Jerry in the same light as Snooks.

I could go on all day about Jerry York and what a great coach and person I think he is. ATL is correct in the statement that York always has the team peaking come tournament time. What really impresses me about coach York is how he fearlessly uses his goaltenders. Parker played 13 games this season, and did an amazing job. This coach knows how to develop talent.

While all the other top teams wilted in their conference tournaments, BC is riding high, except for N. Dakota, but any good BC fan knows what happens to the Fighting Sioux when they run into the Eagles in the NCAAs, at least since 2001 anyway.

Looks like we got Alaska in the Worcester regional. Good draw for the first round, with a potential second round game against North Dakota. I think both teams match up well and it will be a great regional for hockey fans!

Of course, Snooks Kelly did it all without the benefit of collegians from Canada. I suppose his notion of an all USA team now seems quaint; but we were all proud that our BC hockey team under Snooks had no "ringers".

I still remember a couple of games in which visiting players ended up in the penalty box when a bilingual referee understood what was being said in French. [grin]

We did have Paul "the Shot" Hurley, who was the only one in Fenwick to have a private room and be allowed to have a car (a Ford T-Bird), which he regularly ran into the chain across the entrance late at night.

McHugh was the site of round-the clock hockey. My room mate had a weekly 3:00AM game that convinced me, a basketball fan, that there was something to this hockey stuff. Saw my first BC game in 1964 and have enjoyed it ever since.

I am particularly pleased with the success of BC player/grad Jerry York.

Lets hope we continue the progress from Beanpot to Hockey East to National Champs!!

As I said after HE quarters victory, it's great to have a coach that can win in March.

My Dad mentioned the "no Cannucks" on BC teams under Snooks, but the way he remembers it, it was Snooks' own policy not to have Canadians on the team. In fact, I think I remember him telling me that Snooks would not even go out of New England for players. That may have been a sign of the times back then, that you need look no further than route 128 for the best players, but it was another testament to what a local legend Snooks was back then.

I like BC's draw this year, but they were always going to Worcester for attendance reason. College hockey attendance in the Tourney is on its ass with the economy. They also need to stop having the tourney in weird places. Detroit, okay, sure you grab UM fans and if the Spartans make it, then next year is paid for, but Tampa? Frozen four needs to be a drive from one of the Centers of gravity of College hockey and those centers are Boston, Minnesota, Denver, and Michigan.

They tried to make it like Football and College Hockey is not there yet.

Great win fir the Eagles, I can't believe how deep they are. Love the No 1 seed and the Worcester regional.

As for hoops, this will be the third year in a row the ACC got 1 (or less if Duke loses today) teams in the Sweet Sixteen. Aside from that being a shot at all the folks who feel entitled to more Sweet Sixteens for BC under Skinner, I wouldn't mind seeing a post from Eagle in Atlanta on how watered down the ACC has become since the expansion...I'll bet ACC people feel basketball has suffered since it took on two crappy BE hoops programs with virtually no history (VTech and Miami) and one with so so history (BC) for football reasons. I know I felt that way when the Big East expanded in the early 1990s with VTech, West Virginia and Miami coming into the conference (this was way before WV starting making any noise under Beilein). The proof is in the pudding - yes UNC won an NC, Duke has been OK (by its standards), but the rest of the league has been very, very average in my view.

BC is headed to Worcester for the NCAA tournament Saturday. Individual tickets are available starting Monday at 10:00. Let's get a great BC crowd there.

Harry, BC's hoops team stepped into the ACC and rocked it the first 2 years. That was a string of 3 above average years in a row for the Eagles, and that was when the ACC was strong and deep. Since then, they have had 2 below average seasons and 1 average season, which is not bad. Sure, they were bad this year when the ACC was weak, which is not good, but overall the Hoops team has been above average for the decade. My point is, ACC hoops is not worse off because of BC or Vtech for that matter. It is off because NCState,UVA, even Maryland and Wake have underperformed.

I can't wait to get our Sweet 16 appearance in at some point this decade. I feel so entitled to one before 2020, it's ridiculous. I'm owed it. I deserve it. I'll feel even more entitled to having this same discussion again next year.

It's been beaten to death and mentioned repeatedly, the ACC has been down since the expansion. Their NCAA record isn't what it was the previous 20 yrs. Still, 4 NCs this past decade, not bad. Parity is the norm. The articles by the punditry are all re-hashes of the same theme over the last 10 yrs--a diffusion of talent. Yawn. The league is obviously top-heavy. BC has benefited from that. Too bad we couldn't win when it mattered. You know, like hockey.

Well, I'm no math major, douchebag, but BC made it to the Sweet 16 in 2006! As long as you're going to throw spears, check yourself first.