Sarandis and Ebben are out 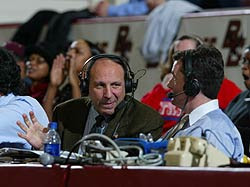 BC will have a whole new broadcast team on next year's basketball games. Long-time voices of BC basketball Ted Sarandis and Bill Ebben will not return. Some of you are probably rejoicing, but I found the news sad. Ted was the ultimate homer, but he was our homer and loved BC basketball. Ebben is a great guy and was underrated in his analysis. The move caught me by surprise so I have no idea why it happened now (I will fish for answers). Meter is expected to take over play by play duties. I like Meter and like the idea of one voice for BC Sports, but still hate to see Ted leave. It is an end of an era.

I am rejoicing. Ted's holier-than-thou schtick on the radio was grating, even for BC fans.

matthew2 said...
This comment has been removed by the author.
2:27 AM

I am indifferent about Ted... like John Sterling with the Yankees, you recognize that he is an arrogant homer, but you don't mind it TOO much... (if you're a Yankees fan, that is!)

Bill, on the other hand, was awesome. His analysis was superb, and he had a good eye for the game. You could also tell that he was a fan, and was emotionally invested in the game. Nothing like great analysis from someone else rooting for the Eagles....

Bill will certainly be missed.

Ugh - what a sad way to start off the weekend.

Ted and Bill will be missed by this guy for sure.

I wonder if the new guys at the Fenway Sports Group had anything to do with this?

One last time all together now - "I apologize a thousand times!!!"

At least we can still hear Ted on sunday nights in boston on 98.5.

This sucks. The only two guys who care passionately and conistently about BC basketball in the Boston media, and they get the boot. Ted seemed to be the only person excited about BC basketball most of the time --- and is as loyal of a supporter as BC has.

Of course, I suppose that's the problem. Gene's not much for loyalty, and certainly does not value continued support of the program.

I will miss both of them, and I will continue to hope that the Athletic Director comes to realize that there is more to BC athletics than just him.

they pick a center!!!

Tennant not holding up to billing so far in draft...but 4th round not yet over.

also interesting to see that Rutgers produced 2 first round picks,,,,, impressive .. . both were native NJ guys.

I loved Teddy, although I must say based on his voice, I thought he was 70 years old. He looks like he is only in his early 50's.

I think Meter will also do a good job. Hopefully, they will pair him up with a BC guy like they do for the football broadcasts.

I liked Ted as a "homer" and thought Bill was an excellent analyst; but the choice of announcers is up to BCAA and its marketing group.

What has not been handled well is the silence from BCAA. Why is there no official press release? No explanation? No announcement of the new broadcast team? This should not have been a surprise move.

There have been no basketball press releases since April 7, 2010. I don't blame whoever is the SID. They have been marginalized by GDF; but it is down to GDF to run the press operation if he won't let the SID do it.

This stuff should not be dribbling out. BCAA should be on top of it with a positive spin.

BTW does anybody know if there was any followup on the recruiting trip to Australia, which was cancelled when new Assistant Gallagher left for the Hartford HC job? Did BC BB send a recruiter to Australia?

Fun spring game today. Where do I get on the Marscovetra bandwagon?

I never liked Ebben. He so frequently stated the obvious as if it was brilliant insight and sounded like a Vienna Boys Choir benchwarmer. Meterparel is the single most obnoxious play-by-play guy I've ever had to suffer through. His inflection is the same whether it's a time-out or a touchdown. Just horrible. The prospect of listening to BC basketball broadcasts just got dramatically less appealing, and I didn't think that was possible.