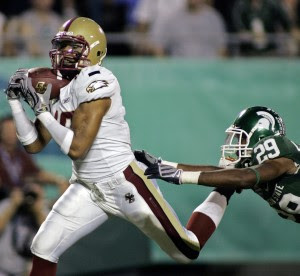 In my preseason work last summer, I predicted that Rich Gunnell would be drafted after a strong senior season. Rich had a strong year and played some of his best football against BC's most talented opponents. He also managed to produce while breaking in two new QBs. He's a good guy and a good football player, so you would think teams would be lining up to draft him. They are not. Gunnell was not invited to the combine and is barely getting mentioned on the major scouting services. If Rich is going to make it in the NFL, it will be through determination and free agency.

But if the program's all-time yardage leader cannot get drafted, then what is the problem? BC has not had a wide receiver drafted since 1987. Gunnell is not a tall burner, but he has enough size and speed to play in the NFL. He has the production. It doesn't make sense. Is there a bias against BC WRs? I have a few theories. Leave your in the comments section.

1. College football is producing too many WR prospects. Think of how many places run the 4-wide offenses. Now consider all the programs that used to run conservative ground attacks. Even the most basic program has too many WRs. So when it comes time for the draft there are more than enough prospects and only the seemingly flawless merit an actual pick.
2. Perception about BC talent. When Matt Ryan was drafted, all you read in the scouting reports was how he was surrounded by mediocre skill players. Most of our skill guys have still come from cold weather territories. Fair or not, there is a perception that these guys aren't as fast as their counterparts in California or Florida.
3. The position was a recruiting afterthought for a long time. Coughlin brought in some good pass catchers but never hung around long enough to bring in an elite WR. Henning loaded up on tight ends. TOB put an emphasis on linemen and often converted DBs to WR. Gunnell was one of the few decent WR recruits of the TOB era.
4. Dumb luck. We've hit on so many positions with under the radar guys that you're bound to have one position that causes headaches. You would think that BC would have stumbled into an NFL WR on its roster. Instead, we've been left with tough kids, willing to play hard but who have questionable size and hands.

I think Gunnell will catch on somewhere. He is willing to play special teams and has enough things going for him that he'll get a chance. I just wish for his sake and BC's, that someone would give him an official shot via a draft pick.

I hope you're right, he deserves his shot. I wonder if Ryan can put in a good word for him with the Falcons staff.

I forwarded this posting to Tommy Waddle (former BC receiver/chicago bear; current ESPN radio host in chicago). Hopefully he'll have a response...

ATL doesn't have a 7th round pick, but a guy like Gunnell would be a steal for them as an UFA. They're looking for some young depth at WR after a disappointing shuffle of veteran FA WR's last season following Douglas' season-ending injury. Matty is obviously familiar with Gunnell, and I think he puts in a good word about him... after the draft.

I hope ATL does pick him up, I think it would be a win for both sides. Once he gets to training camp, he'll prove himself 53-man-worthy.

Can someone forward this to Kelvin Martin and Brian Brennan too?

Anyone see this on Colin Larmond Jr.?

I think with Larmond, Clyde Lee, Flutie and incoming Shakim Phillips we have a nice little receiving group.

Sure thing Thunderdome - next person to travel 25 years into the past, be sure to pass this along se we can prove ATL wrong

Do you recall the TD in the bowl game? Gunnell outran the entire USC secondary. I can't believe no one is giving him a shot. He'll make it somewhere as a free agent and I will bet he will be on an NFL roster next fall.

How is atl wrong? He is right. No NFL receiver talent at bc in atleast a decade. Wow! It is the biggest hole in bc's NFL resume. Great QBs great Oline good backs. But zilch at WR or TE. Curious. As to why. But think we may be turning a page now on that issue.

What really is the issue with gunnell? Quckness? Not explosive when. Needed?? Seems to be tough. seems to have excellent hands. But he is listed as #80 WR in draft or something like that. Yes he is no hakim nicks. But gunny seems NFL capable. Any insights out there?

The Patriots have about 32983492830 7th round picks and have drafted quality WRs in that round before (David Givens, Julian Edelman). Wouldn't surprise me to see Billy take a chance on him Saturday.

That the football "experts" know nothing has never been more clear to me than in the gushfest over Clausen and Tate following the BC-ND game. Clausen didn't make one tough throw that whole game, and Gunnell COMPLETELY outplayed his All-American counterpart.

Unknown said...
This comment has been removed by the author.
3:45 PM

Why I agree that Rich will likely not be drafted, please don't take ANY of the so-called "Draft Experts" or draft ranking websites too seriously, especially when looking at the bottom of the draft. A true "NFL Draft Expert" does not exist, and there is no website in existence that can accurately predict how the entire 7round draft will go. It's just too fluid.