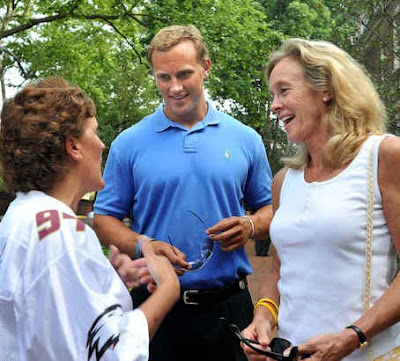 The real news of the day was Herzy telling reporters his leg was "80% to 85%" percent back. There was also a nice feature on Mark in the Philadelphia Inquirer on Friday (thanks to George for the link). Now that it looks like Mark has turned the corner, can we move onto the frivolous? Look at that picture above. Does that look like a bad-ass, cancer-beating, All America Linebacker? He looks like he got off early from his summer internship at a Law Firm. Or he's a young Financial Analyst whose office goes casual on summer Fridays. I am glad he has his hair back. I just think it is time for a return of the mohawk! Would it be that weird for him to wear the eyeblack when in public? I don't care that it is hot or summer time -- get the beard back ASAP! Quarterbacks wear light blue polos and hang out with their mothers. You're on defense, Mark! I know...I know. These guys are different...Kuechly wears Clark Kent glasses...Mark goes by Sandon in class...they all study and graduate...blah blah blah. That's nice. But that's not what I think we need. Put the polo back in the closet. Take some clippers to some of those nice new curls and get in kick ass mode. Summer practices are just around the corner. Go BC and beat cancer!
Posted by ATL_eagle at 6/07/2010

Maybe he's got a party in the Hamptons or Newport this weekend.

I like your idea, ATL. I say we give him another month to enjoy the hair he once didn't have, then July 8 (one month from today) it's return to bad assness.

I have to say I am very much looking forward to the eye black.

Never thought I'd look forward to a Weber State game quite this much.

bad news: I'm pretty sure eye black has been outlawed by the NCAA no fun squad.

That and I think Bryce Harper bought out every store in th country.

They just can't write on the eyeblack anymore conlonc...

It is refreshing to see that wholesome, clean-cut and tatoo-free is still in vogue at BC.

Very amusing post, atleagle, though personally I'm just glad to see Herzy looking healthy again. I saw him at the Spring game and even back then he was in great shape. As for the mohawk... great, but it really doesn't matter what look Herzy decides to go with. Staying healthy and getting back on that field to achieve his dreams is all that really matters now.

He does look like an 80s movie bad guy. And frankly, that's fun look to pull off.

I don't care what Mark and Luke look like so long as they crush their opponents on the field.

It's so good to see him in good health. Remember, last year at this time, he was fighting for his life. We should all be grateful for this good outcome and let's hope he can return to his passion this fall.

Anyone notice that the Notre Dame blog is shut down? Another reminder that we need to thank ATL for his countless hours in providing us links and updates and giving us a forum to follow BC sports.

This is hilarious. Great breakdown!

ND back on the schedule:

“Jack Swarbrick and I agreed that since Boston College and Notre Dame are the only Catholic institutions that play Division 1-A football, we should continue to play each other over a period of years,” said DeFilippo.

Here is the new 6 game BC v ND schedule!

Hopefully we are dropping games against Buffalo (or Umass or RI) in 2012/13 to accomodate ND -- this is a nice improvement for one of our OOC games.

What's up with the gaps in that schedule with ND. Any chance that one of them will be filled with a date at Croke Park in Dublin???