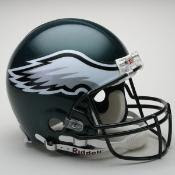 Michigan and Notre Dame often take themselves way too seriously. Their traditions. Their history. What they will or won't do. Both consider their uniforms sacrosanct. Yet this season in their game against each other, they will debut special uniforms. They are calling them throwbacks, but Michigan's version is much more of a throwback/future clash. I used to hate this sort of overt marketing but now I am a convert. And I am also wondering if these two self important programs can mix it up a little, then why not BC?

BC last used throwbacks in 2004. The style recalled BC's uniforms of the mid-'80s. It was a nice touch but not exactly what I had in mind. I want BC to do something unique. Let's get Under Armour involved! I loved what they did with the basketball uniforms. Think of what they might do with a one time only event. A logo on the helmet? Wings?

I know BC fans tend to be traditional. I am not naive enough to think that one uniform will change our momentum on the field. It won't put butts in the seats. But it's something. There is tremendous apathy surrounding the program. It will take a numerous small steps to change that apathy. Changing our look for one game seems like a low risk way to shake things up.

Email ThisBlogThis!Share to TwitterShare to FacebookShare to Pinterest
Labels: BC marketing, Under Armour, uniforms

not feeling the wing idea too much, but i always liked the idea of the midfield BC logo on the helmets.

also, for one game only, black uniforms. black would look awesome with maroon and gold trim. or a "gold-out" may work well, too...

Someone suggested putting the heights on the back of the helmet. I could go for that. Also a gold uniform.

Gold uni's that match the hoops ones!

"Sucks to BU" on the front of the helmet so it's the last thing you see before getting plastered by Keuchly or run over by Montel.

I used to like how BC stayed away from gimmicky uniforms and kept it to simple maroon and gold, but now everyone's going with these special, one time use only uniforms, there's no reason we shouldn't either. I mean tOSU broke out alternate uni's for the Michigan game and those uniforms are treated like the Holy Grail.

I don't have an alternate uni suggestion, but I would like to see the white tops/ gold pants combo more often. That looked awesome when they trotted out against USC

I agree on the white tops/gold pants.
I'm good with Gold Pants all the time.
I'd rather go back to maroon pants before trotting out white pants.

I would love a maroon helmet for one game. My preference is for wings on it, but I would also endorse numbers a la Alabama.

I have enough problems with short football pants above the knee - and shirts hanging out!

What is this game coming to?

I guess I could go for maroon helmets for a special game - or one time only.

I definitely like gold pants with the white away shirts. I'm with Eric - gold pants all the time.

I hate white pants and don't particularly like maroon pants.

So any special uniform has to be the shirt, IMO - or the helmet.

When Flutie threw "the Pass", BC had gold helmets. The entire outfit photographed well on the cover of Sports Illustrated. The current maroon looks like it came from one of the French Impressionists. If it ain't broke, then don't fix it! The stripe came from Coughlin to mimic the Giants. They haven't played like the Giants.

All black with little white collars, maybe, with an image of a diploma on the helmet (helmets shaped like mortarboards just wouldn't be feasible).

"Time to Exorcize" on the back collar.

Throw back unis are great.

We should have unis harking back to our glory days

That is not the Flutie days, but "team of desitiny" days. Back when Big Jack Krack was a student :~)

BAck to the 1940 consensus "National Champions"

Check out these unis... let's got for that look See 1940 BC uniforms

BC must never, ever, ever emulate the low life Philly Eagles. If we borrow from Philly, bad Karma -- for sure - will fall upon BC Eagle Nation.

All reference to the Philly Eagles must be banned from this site.

BC is a much more of Giants place than a Philly Eagles place (starting with team owners). I would say BC is 10-1 in favor of the jints over Philly -- Bah. Who really likes Philly anyway??

(scroll down to color picture from 1928 Heights)

BC should use the unis as an attempt to reach out to the fans. Let the SuperFan shirts influence the design. I'm thinking maroon pants and helmet, with a SuperFan yellow jersey.

I think there would be quite a pop when the fans realized the team came out honoring us.

Back in my day, mod34b - our football team sported solid gold pants, and solid gold helmet.

There was a stripe on the shoulders, as I recall - pretty straight-forward - real maroon, also. That was 16 years before Hail Flutie. :-) He was one player who captued the attention of Boston sports fans!!! He proved that college sports can be interesting in a professional sports town.

The picture of Doug Flutie on the cover of SI shows striped pants - so the stripe was introduced before Coach Coughlin.

Doyle would second this one.

I prefer traditional, plain gold helmets; but if you must have something on the helmet, then use the old-school, heraldic, "skinny Eagle". [grin]

Please, no black! The school colors are maroon and gold--not black.

I've always worried that BC would smack a logo on the side of the helmet. If it's a one off thing, I can get over myself, but BC should never, never make that change permanent.

I realize it's all an attempt to attract recruits but these ND helmets are terrible. Lately schools use the alternates as a chance to cover every available inch of the uni w/ some logo.

If they do alternate unis keep it simple and leave the helmet alone.