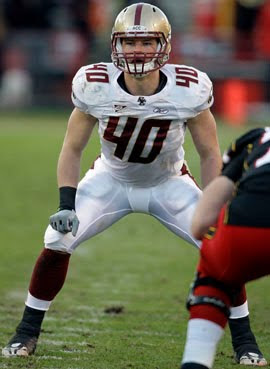 Luke Kuechly is leaving BC early to enter the 2012 NFL Draft. It is not really surprising and stinks for BC fans, but it is the right move for his football future. Experts project the All America Linebacker to be a first round draft pick, likely to go in the teens. The prolific Kuechly broke tons of records and earned dozens of awards while at BC, so there wasn't a lot left to accomplish. I take him at his words when he says he loves BC but his draft stock will never be higher. While BC should improve next year, I don't think Luke is going to miss a championship run.

I don't know what his legacy will be. He wasn't flashy. He dominated during a blah time on the Heights. Even though it is unrelated, I think a lot of what we think of his time will be influenced by his success as a pro. But there is no denying that he made a huge impact while on the field. His productivity is unmatched and I've never seen a guy shed blockers like he did.

No one on the teleconference asked him about his injured elbow but I imagine Luke's stock will go up through the combine and interviews. He's got underrated speed and incredible instincts. People will wonder about his size as a MLB in the NFL, but I think he'll be great in any system and any position.

As with all BC guys, I wish Luke nothing but the best and thank him for representing BC with such class.

First BC guy to leave early since William Green?

Congrats to Luke on a great career at the Heights...he's a class act and a tremendous talent. He's going to look damn good in a Pats uniform.

The Bills will take him twenty picks earlier.

@Matt, only if the Bills consider him a pass rushing LB. Their #1 priority is improving their pass rush, according to their GM in today's press conference.