Why don't you just watch the games from the booth, Spaz 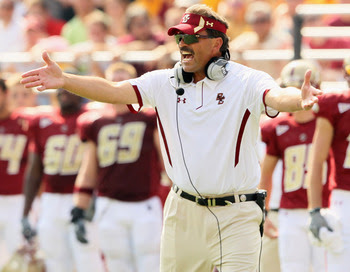 Until the Sandusky news broke Spaz was always quick to remind people of his connection to Penn State and Joe Paterno. His loyalty to the school is one of the reasons BC hasn't poached any Penn State recruit (despite having plenty of potential scholarships). So now as we near the end, I hope Spaz follows his former role model into the coaches booth this season. Do we really need him on the sidelines managing games? He never uses his timeouts. He seems to hate the obligatory halftime interview. The players seem to check out any time he gives a "rah rah" peptalk. I have more faith in Doug Martin and Bill McGovern winning games with Spaz removed from the situation than I do with Spaz involved.

Spaz's protector is gone and he's probably next. I am sure the man has pride and wants to go out on top, but I am not sure he can be a positive influence. I would prefer if like JoePa's final seasons, he was head coach in name only. This works for everyone. Spaz keeps his paycheck and title and yet doesn't put up with the stress or grind of the job.

This season hasn't begun and we are already off to a weird start. Why not go full tilt boogie and go without a head coach? In my mind, it's a win-win that might lead to a few more wins.
Posted by ATL_eagle at 8/20/2012

Or, in an effort to be more honest with fans, BC should insist that Spaz wear a clown outfit, including clown shoes and nose!

I have been patiently waiting since last week for Observer College to post...come on...how about it?

Agree completely. However, if wishes were horses, pigs would fly.

We want to see a coaching plan that gives our players a winning formula.

So let's come out using all of our options and play college football.

RRPP/3rd&Nyquill is unacceptable. Once we moved away from that last year(1 year removed from Nyquill himself), we found some success. This is not rocket science.

I don't care where Coach Spaziani positions himself during the game - but we need him to be part of the solution - to lead the solution, and not be the problem. One can lead by giving his coaches the wide view, and letting them do their jobs.

If Spaziani overcoaches, he's fired - because we will be unsuccessful.

"Levano later skied a 47-yarder that compelled Bobby Swigert to signal for a fair catch. Levano added a 38-yard punt from his own 19 with no return."

I don't see Swigert catching any of Rettig's passes - is Spaziani holding him out as a caution because of his injury last season?

knucklehead said...
This comment has been removed by the author.
4:35 PM

Like I have been saying all year the key to this season for Boston College and for Spaziani is the first three games. If we don't go 2-1 then the season has the potential to be a flipping s-storm disaster along the lines of the Red Sox this year. Although it could have been worse if Gene were still here.

(My quick theory on Gene is that he was given the option of removing Spaz or resigning and he chose to resign).

Most likely if he gets through the season he will be removed anyway when the new AD is brought on. Undoubtedly the new AD will want his own football coach.

Spaz has taken a beating here for years, is definitely gone after the season, and I think that it is time to shift the focus to the team so the coverage of the program is at least 50:50 Spaz:Team

I think that we have a legit chance for 6-6 which means the next coach is coming into a program with some decent talent and the potential to be a 8-9 win team in 1-2 years from now. Which is a big selling point for a new AD and HC.

But Northwestern is to the Big 10 (12) like Vanderbilt is to the SEC.

If you don't show up, they'll beat you - as happened to Nebraska at home last November.

We have to beat Miami and cruise through Maine to have the confidence to go to Evanston and exact revenge.

We need to be 3 and 0 in mid-September for a good year, I think. We'll need the extra week to prepare for Clemson and might catch them a little banged up .

At FSU and GT back to back in October will be tough.

Go BC - let's come out of the gate smokin' hot.