Go Crazy! Why BC should schedule Ohio State in 2013 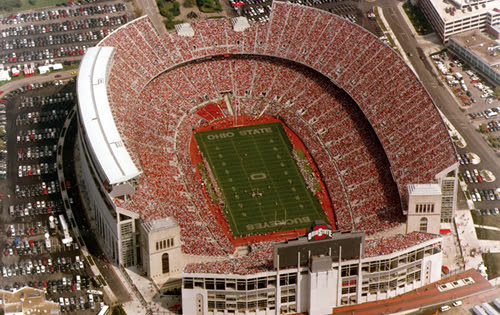 The ACC's decision to revert back from nine to eight conference games has BC scrambling to find an opponent for 2013. The good news is that plenty of other respectable programs are looking too. BYU needs a game. We could play Northwestern again. ESPN could also find us an opponent too if we are willing to play on a random night. The conventional wisdom is that Brad Bates will wait until after he's hired a new coach to find a 12th opponent. That makes sense. You would want your new guy to have some influence on the process. But there is one potential opponent lingering out there who I think BC should schedule now: Ohio State. This might seem crazy. We will have a new coach, we already scheduled USC and we will probably be coming off our worst season in more than two decades. But where others see a chance for failure, I see opportunity.

No one would expect us to win
New coach. A losing team. On the road against Ohio State early in the year. The spread would probably be 30 points. And that's fine. If we get killed no one cares. If we hang with them for a bit, the new coach gets some respect from the fans and college football establishment. If we shock the world and win, it is huge, program-building momentum swing.

Ohio will still be a recruiting focal point
Regardless of who we hire, he's going to have to recruit in Ohio. Our ties to certain pockets of the state, the strength of various Catholic schools and the alternative that BC provides to lower-level Big Ten recruits means we have to maintain a presence there. Traditionally we've done so by playing MAC teams. Playing at Ohio Stadium once would be an even stronger planting of the flag. Plus it would be a nice trip for all the Ohio kids on our roster.

The payoff
If Ohio State agrees to the game, they will have two options. Either this is a one-time game at Ohio Stadium and they pay us a huge amount (north of $1 million) or they agree to a home and home (with the return game coming in the next few years). If they only want the one game, that's fine. Consider it a boost to the budget to pay for Spaz's buyout. If they agree to a home and home, that is a great tool for our new coach. He can go into recruits' homes and sell that future game. This is what I would say to our recruits and fans: "we had a rough game against Ohio State, but wait until they come to play us in 2015. They will see a whole new Boston College!"

Changing the perception of BC's schedule
BC has been notorious for our careful scheduling. Gene built schedules every year that he felt were balanced and lent to wining seasons. This didn't create a lot of excitement or credibility. But we did win. I was at BC when were were still living with Coughlin's "we'll play anyone" attitude. In 1995 we played a full Big East slate, plus Michigan, Ohio State, Michigan State and Army. It was the toughest schedule in the country. BC went 4-8. Down the road we will need to adopt Gene's scheduling philosophy again, but for next year we can do whatever we want. If we go 4-8 again but the season includes Ohio State and USC it will be considered a good first season for our new coach. And then he and Brad Bates can use this one game any time someone challenges the strength or excitement of our schedule. I can just hear it now: "during the last five years we've played Ohio State, Notre Dame, USC, Northwestern, etc out of conference."

You only want a coach who wants to play Ohio State
I am sure Brad Bates wants to respect the opinion of our new head coach. But if our new leader doesn't have the hunger and confidence to rebuild BC and take on programs like Ohio State, then he is not the right guy for BC right now. I am all for smart scheduling but every once in a while you need to take a chance. This is BC's chance. Go sign this contract and dot that "I."
Posted by ATL_eagle at 10/19/2012

Want to schedule Ohio State in 2015 or 2016, when the program will at least have a chance to be competitive? You won't find a bigger advocate than me. But scheduling them next year just compounds the flaws of the Spaz Error which have turned us into a 1-AA program hiding in a BCS conference.

the pay-out of a 1-and-done game is interesting too. if it lessens the blow from the Spaz buyout, we may be able to make a more competitive offer to a coach as well.

i like your thinking ATL but i can see too many people seeing only the negatives. for Bates, since this would be one of his first move as AD, that could be a poor use of political capital.

Who cares if we need to beat a patsy in 2015 or 2016 to get to a bowl? Ask the players whether they'd prefer to play a game at Ohio State than play a mid-December bowl game in front of 15,000 at RFK stadium. A game at Ohio Statdium is a bowl in and of itself.

That is, when the team is competitive and neither risking embarassment nor injury. Next year, we'd be risking both all for a payday that would involve no enjoyment for the team nor the fans. It's not worth it. The Spaz Error should not be an excuse to get the team steamrolled for $ 1 million. The school made the decision to hire the clown, and extend his contract, and they can afford to pay it without throwing the team in front of a speeding train.

I wonder if that's how the FBS players, coaches and fans feel year after year as they travel to FCS schools to get their asses handed to them. "Man, I wish we could just stay within our own pond of mediocrity where we won't get hurt."

next year our seniors on offense will be: rettig, swigert, coleman, andre williams, finch, sinkovec, amidon, ian white, maybe pantale if he doesn't play this year

also our kicker Freese will be a senior.

we will also have a slew of juniors who have had significant PT.

in other words, why not? this team will have experience and i honestly think if we re-played this year with a different coaching staff we'd be 3-2 -- i don't think the talent level is that bad. let's take the money and play these guys

I have always been in favor of playing, and possibly losing to great teams, than scheduling Stony Brook and winning. It is much more exciting for the players and coaches as well. Totally in favor.

Or we could always lose to a tecwjo lost to stony brook.

Or we could always lose to a tecwjo lost to stony brook.