All our problems captured in one play

Occasionally I will break down one play to show what I feel are bigger problems. No team is perfect so this can feel like I am cherry picking bad moments, but I picked this play because of when it happened, the breakdowns that happen and how it killed the game.

This is the situation. We just forced another Notre Dame turnover and are driving with the hope of making it 21-14. There is over 11 minutes left. We converted on the first series and are at the Notre Dame 38. Incomplete on 1st down. WE CALL A TIMEOUT! I understand. We are behind. We want to make sure everyone is on the same page and we a ready to roll out our best plays. Right? Right? Out of the timeout we come with one back (Finch), Two Tight Ends on either side (Pantale and Naples) and two wide receivers. 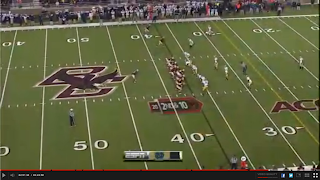 Naples motions to the field side and we start the stretch play (zone blocking). This is a bread and butter play for most good offenses in college and pro football. At the snap there are no initial problems. Cleary and Pantale double their man, the middle of the line is losing the battle, but if Duece can get by them, he should have plenty of space to turn the corner and get a nice run. 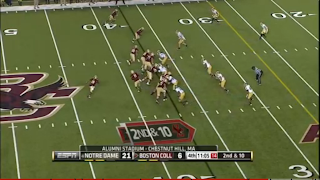 This is where things breakdown. Cleary releases to the second level to block Te'o (who is so overrated compare to Kuechly, BTW). The problem is Pantale is losing his battle. Clearly cannot release that early! We have to win upfront before trying the second level. You can also see Vardaro losing his battle. This is important because now Duece doesn't have a cutback if Pantale gets bowled over. 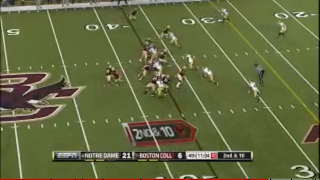 This is where it all blows up. Pantale loses his man. Te'o runs right by Cleary and the right side of the line collapses. It is now 3rd and 13. The drive is effectively dead and the game is over all because BC couldn't deliver on a simple stretch play out of a timeout! 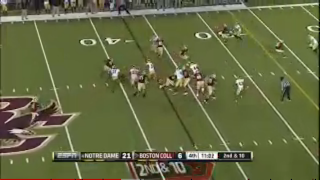 Like I said, this is cherry picking. But one of the failures of Spaz's tenure is to ever establish an offensive identity. Maybe it was the guys he picked to run his offenses. Maybe it was the way the team prepared. I don't think it is talent. Cleary and Pantale are good ACC level players. They didn't play well Saturday, but they've certainly shown the ability to handle this play. But I don't know what goes on on a week to week basis, but this is a breakdown of communication and execution out of a timeout on a critical drive.

People love to rewrite history with regards to Dana Bible and Steve Logan. One things I will credit both with, is that they both had plays they could call on and deliver over and over again. Not home runs. Not game changers, but simple easy to execute plays that kept the ball moving and helped keep drives alive. In five coordinators we have never gotten to that place with Spaz.
Posted by ATL_eagle at 11/11/2012

inability to develop bread and butter plays is Jags fault.

kidding aside, this team is just so brutal to watch. spaz is such a loser its not even worth the hash tag. put this guy out of his misery already, he clearly doesn't want to be there. that we'll owe him any money after he effectively mailed it in for 2 straight years is comical. whatever. bates should literally fire him the minute the last game ends (since he has apparently decided that waiting until the end of the season is the right move -- whatever, if thats the case there should be no evaluation time or anything, as soon as the season ends he should be fired).

Hey at least the basketball team actually won. It looks like Ryan Anderson had himself a day and that Rahon also played well.